MOMMY, REMEMBER THOSE CLOWNS THAT CREEPED ME OUT?


That "Freedom from Religion Foundation"!  Yeah, those clowns!  Now they're suing the Cranston, RI flower shop that denied the sale of flowers to - guess who - Mizz Jessica "I don't like your half-century-old prayer banner, so it has to come down" Ahlquist.  Why did said flower shop deny Miz Ahlquist?  Simple!  Because she (with the help of her daddy, and the ACLU, and the FFRF) successfully sued Cranston West High School to have a beautiful prayer banner removed, that was written by a CWHS student (or is it CHSW, Cranston High School West?  but nonetheless...) over fifty years ago.

Hint: Private businesses have the right to deny service to whoever they please.

The Freedom from Religion Foundation doesn't have a case.  Nor a prayer.  Literally!

AND WHILE I'VE REVIVED THE BLOG FOR A LITTLE BIT...


It's amazing how when you're driving through the city of Pawtucket, Rhode Island, after a snowstorm, you can ALWAYS tell where the city limits are because Pawtucket has the worst snow removal system in the state of Rhode Island (Central Falls comes a close second.  Drove through it yesterday.)

Yesterday, I went to my church in West Warwick, Rhode Island, to play the 9:00 and 11:15 Masses, and once again this morning for a funeral Mass.  While there is not much difference between the population density on the busier streets of West Warwick (namely Providence Street, which is RI state Route 33) and the Broadway neighborhood in Pawtucket (Broadway is part of US Route 1, which runs from Madawaska, ME at the Canadian Border to Key West, FL).  Yet the streets I trekked in West Warwick are perfectly clear and unflooded (as was New London Avenue and Pontiac Avenue, both in Cranston).  Broadway in Pawtucket, along with other main roads in the area - Cottage Street and Central Avenue - was filled with frozen snow chunks from half-assed plowing, snow banks that went halfway out into the road (namely where you enter Broadway from the exit ramp from Interstate 95), and deep puddles.  Our minivan dang near bottomed out several times trekking the streets of Pawtucket.

And if that isn't enough, Pawtucket Avenue in Pawtucket (also part of US Route 1) was also full of chunks and layers.  But once you cross into Providence (where it is now North Main Street, also part of US-1), the road is perfectly clear.  Providence, a city whose population is more than double that of Pawtucket, had better roads this afternoon than Pawtucket did.  My wife, who was with me to witness this, has a nasty disk bulge in her back, and believe me, she was feeling every bump.

Granted we had about 25 inches of snow this weekend, but it's a shame when you can find the city limits just by the condition of its roads.  You know you're in better-kept roads when you leave Pawtucket to cross into Providence, East Providence or Lincoln, RI, or Attleboro or Seekonk, MA.

So, I hereby give the February 2013 WTF Award to the city of Pawtucket for, once again, poor planning and poor plowing.  They even fail in snow removal when there are only two inches on the ground, let alone two feet, while other cities and towns seem to get it!

APPARENTLY, I'M NOT THE ONLY ONE...

...who has referred to the sitting President of the United States by his full name "Barack Saddam Hussein Obama Bin Laden".  I Yahooed (not "Googled", I used the Yahoo search instead) that six-fold name in quotes and there are 64 hits - some of which date back to 2008, at least a year before I started using it and pissed off an arrogant leftist (without even knowing that someone beat me to the punch).  Here are the results.

Unfortunately, we still have another 47 months of BSHOBL.  In the meantime, I will continue to exercise my First Amendment rights.  ;) 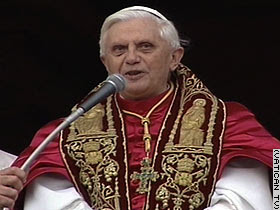 Anyhoo, I read some shocking news this morning, as did the rest of the world, I'm sure.

As of the end of this month, our Holy Father, Pope Benedict XVI will retire, the first to do so in over seven centuries.  The year 1294, to be exact, was the last year that a pope resigned on his own.

His departure is due to reasons of health.  After all, he is 85, and he did outlive his immediate predecessor Blessed Pope John Paul II by a year or so (thus far).

There is no doubt that I, your friendly neigborhood iSNARK!, will miss this great Pontiff.  After all, he wrote The Spirit of the Liturgy and other books and documents that teach of the proper implementations of Holy Mass, including its music.  He wrote the Motu Proprio Summorum Pontificum, which makes the Traditional Latin Mass according to the Roman Missal of 1962 (which he dubbed "The Extraordinary Form of the Mass") more accessible.  While certain people in one music message board via Yahoo! Groups I once frequented were "heartsick" over the election of Jozef Cardinal Ratzinger as Pope Benedict XVI, I rejoiced, shouting out "YES!" like the Red Sox had just smoked the Yankees.  During the conclave that followed the death of Blessed Pope John Paul II, I was rooting for (in my heart) and praying for the election of either Jozef Cardinal Ratzinger or Francis Cardinal Arinze, two prominent liturgists of the day who really "got it" when it came to liturgy and the Catholic faith.

Now Pope Benedict's departure will have me temporarily "heartsick".  However, I can understand why he is stepping down.  As my local bishop, Bishop Thomas Tobin, rightly put it, “Our Holy Father’s resignation is, I believe, an act of great humility for he understands that the needs of the Church are greater than his own; that ultimately the well-being of the Church is God’s hands, not the Pope’s.”  A sign that the Holy Father really cares for his Church enough where he feels a better Shepherd can care for it at this time.

Now, as I rooted on Cardinals Ratzinger and Arinze and prayed hard for the election of either/or, I will do the same in this conclave.  I've had these dreams (night and day) on and off that it is possible that our beloved Church could have its first American-born Shepherd.  I've been rooting on Raymond Cardinal Burke, who did wonderful work in the Diocese of LaCrosse and in the Archdiocese of St. Louis.  He is a prelate who really has (and uses well) the backbone needed to uphold Catholic teachings.  I think he would do very well as a pope.  It is not to me to decide.  That is to the College of Cardinals.  However, I can still root him on and pray, as I did in the last conclave.