I stumbled onto this ad via a couple of Boston area organist friends from Facebook a while back.  I've been meaning to post on it.

Unfortunately, this is a real ad from the website of the Archdiocese of Boston.

I don't often "share a memory" that Facebook encourages me to share, but I posted a link to this article on Facebook about four years ago.  This article has me connected in two parishes, believe it or not!

Something We've Been Trying to Say for Decades...

...is reiterated in this excellent article by Roseanne Sullivan.  I will let you read for yourself what she has to say, but I'll enter some snarky-ish thoughts of my own.

Following is the music for this coming Sunday's liturgy, for the Fifth Sunday of Easter.

Entrance hymn: This joyful Eastertide, "Vreuchten"
Gloria: Missa "Christo Risusciti", Luigi Picchi
Psalm 145: R./ I will praise your name for ever, my King and my God, BMP (.pdf)

- See this post in which I tell the tale about the two texts that begin with this line, and their two tunes each!  The tune used this day is the tune from which our seasonal Mass setting Missa "Christo Risusciti" is adapted.
Liturgy of the Eucharist: Missa "Christo Risusciti", Luigi Picchi, and adaptations thereof
Communion anthem: Cantate Domino canticum novum, Vincent d'Indy

Scribbled by Brian Michael Page at 5:24:00 PM No comments:

INTROIT
Psalm 98: Sing to the Lord a new song

RESPONSORIAL PSALM
Psalm 145: I will praise your Name

COMMUNION
Psalm 80: I am the true vine
Scribbled by Brian Michael Page at 5:10:00 PM No comments:

How to Make Ordinary Look Extraordinary

Don't let the title of this post deceive you.  I don't mean "add more extraordinary ministers of Holy Communion"!  I still remember the initial nightmare of the formal installation of the first five men at the church I attended as a teenager.  They really thought they were extraordinary.  Talk about an "all about them" moment if there ever was one!  But I'll save that for another post.

I read an excellent article from The New Liturgical Movement this afternoon on how to made the Ordinary Form of the Mass (current Missal) seem as sacred as the Extraordinary Form of the Mass (1962 Missal), just by sneaking in some elements that seem unique to the Extraordinary Form (but could very easily go well in the Ordinary Form).  And it's something I see periodically from time to time from different priests - not all of the elements from all of the priests in question.  Mind you, I've only familiarized myself with the Extraordinary Form in 1999, when I served four solid (but very happy) years at Holy Name in Providence.  I won't list all the elements the article lists.  I'll let you read the article to get them all (let's be fair to the author(s) of the original post).

I guess the first element I experienced was at Holy Name, in Ordinary Form Masses in the main church.  A bell (I call it the "introit bell") signaled the start of the entrance procession.  That practice is the norm at my current parish, Sacred Heart, as well.

At a couple of parishes of late, including my current parish, there is the "triple ring" of the bells ("Sanctus bells", I believe they are called) at the elevations.  Now, if they were spread out like in the Extraordinary Form, that would be even cooler, I think - yeah, kneel (one ringy-dingy) - elevate (two ringy-dingy) - kneel (three ringy-dingy).

At my current parish, I inherited a nice practice in the Eucharistic Prayer, and we do this almost exclusively at Masses celebrated by the pastor.  There are a number of musical settings of the Mass where there is music for the elevations.  Traditionally, the Sanctus and Benedictus were often sung separately, especially if the music was a choral setting.  In between the two, while the priest prayed the Canon, the organ played softly, whether it be written music or improvised, but would open up once the Host was elevated, and once again when the Chalice was elevated.  Though the Sanctus and Benedictus is a single entity in the current Missal, I play the soft music (I often improvise on chant themes of the day or season), then open up with each elevation (near full organ).  The bells still ring along with the fanfares (three times).  After the Memorial Acclamation, the organ is silent until the concluding Amen.  (Incidentally, this practice is not effective with guitar or piano.  Has to be an organ.)

One tip of the article mentions always using the Roman Canon (Eucharistic Prayer I).  I know some priests personally who do say the Canon exclusively, and invoking ALL of the saints listed (even the optional ones in parentheses, et al).  One of those priests also says "Through Christ Our Lord, Amen" in its specified instances (also suggested in the article).

Some priests now actually celebrate the Ordinary Form ad orientem.  Yes, you can do that, you know!  My pastor does that during Lent and Advent.  Unfortunately, our church is small, so at Christmas and Easter, the abundance of flowers takes over the ad orientem space.

I'm usually not in the sacristy immediately after Mass (I'm doing a postlude), but I wonder how many people actually act on the suggestion of doing the prologue to John's Gospel (John 1:1-14, known in the Extraordinary Form as the "Last Gospel", which concludes all Masses on Sundays and feasts) en route to, or inside of, the sacristy after Mass.

In the "Mnemonic Principle" paragraph, that is, adding things that no longer exist in the current Missal, like commemorating saints/feasts that no longer exist on the day you're celebrating, I think so much of my own birthday, July 1, which used to be the fixed date of the feast of the Precious Blood.  In the traditional liturgical calendar (you can find this in most hand missals), in addition to the feast/saint of the day, many days also have commemorations of yet another saint/feast).  This is the concept I think of in reading that paragraph.

Another idea would be to reinstate the Dies Irae sequence at the Funeral Mass.  One could chant this during Communion, after the Lux Aeterna.  Or, if you're really brave, go ahead and add it after the Epistle reading, the proper location of said sequence.

Finally, expanding on the Funeral Mass topic, something we do as a rule at Sacred Heart is use the traditional responses to the Agnus Dei tropes unique to Masses for the Dead.  Traditionally, the Sanctus and Agnus Dei for the Requiem Mass (and even the Funeral Mass to this day) are taken from Mass XVIII (the most commonly used Mass chants in Latin, as they come from the Jubilate Deo collection of Mass chants issued by Pope Paul VI in 1974, as well as amongst the simplest chants).  But in the traditional Mass, the two instances of "miserere nobis" is replaced by "dona eis requiem", and the ending "dona nobis pacem" is replaced by "dona eis requiem sempiternam".  I inherited this practice at Sacred Heart, and continue it to this day.  Even the visiting priests I've done funerals with like this.

So many ways one can put the "Holy" back into "Holy Mass".

SAVE THE LITURGY, SAVE THE WORLD!

Here we go: Music for Fourth Sunday OF Easter (or Third Sunday AFTER Easter lol)

Selections from my Psalm 151 project as they apply to the Fourth Sunday of Easter, Year C, aka (in the Ordinary Form) Good Shepherd Sunday.

INTROIT
Psalm 33: The earth is full

RESPONSORIAL PSALM
Psalm 100: We are his people

COMMUNION
Psalm 23: I am the good shepherd

As an aside, if you have a copy of Ted Marier's brainchild hymnal Hymns, Psalms, and Spiritual Canticles kicking around, check out Sr. Theophane Hytrek's I am the good Shepherd, #377.  It's quite nice!

OK - who has a caption for this designer high pulpit?  Found this on Facebook this morning! 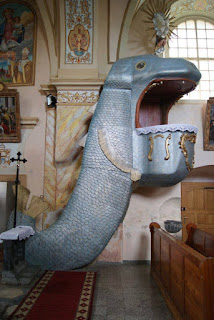 In what looks to be an otherwise beautiful church, this high pulpit came from the Church of Saint Rocko in beautiful downtown Bedrock (thus the spelling "Rocko" instead of "Rocco").  Or was it Saint Stoneyslaus?  Or perhaps Our Lady of the Gravel Pit?

Dinosaurs were used for many purposes on The Flintstones.  Fred used one to move rocks around from one pile to another for Mr. Slate's quarry.  Dinos also served as buses, taxicabs, paddy wagons (Fred got hauled in by one for disturbing the peace once), and even a piano (on the early 70's Pebbles and Bamm-Bamm cartoons, in which Pebbles and Bamm-Bamm are teenagers).  But I've never seen one as a high pulpit until today.

Whatever edifice the dino pulpit came from, I'm sure it had rock-solid pews, as well as organ pipes carved from rock (you can see the steam blowing out of them as the music is played).  And since everyone in Bedrock walked barefoot, that made the Washing of Feet so much easier on Holy Thursday.

Hopefully we won't get any more snow!

- Some hymnals use the name "Bohemian Brethren" for this tune.  Same thing.  I prefer "Mit Freuden Zart", because "Bohemian Brethren" reminds me to much of "Bohemian Rhapsody", and though I like most of Queen's songs (when I'm not in church), the "Rhapsody" is one of only two of their songs I cannot stand.  It's like coming to church and hearing "Eagle's Wings" for the 154,000,000th time.
Gloria: Missa "Christo Risusciti", Luigi Picchi
Psalm 30: R./ I will praise you, Lord, for you have rescued me, Sam Schmitt
Alleluia: Owen Alstott, adapted from O Filii et Filiae, Mode II
Offertory hymn: Christ the Lord is ris'n today, "Heil uns Heil, Alleluia"
- While most hymnals name this tune "Victimae Paschali" or in full "Victimae Paschali Laudes", I think too much of the Mode I tune used for the Paschal sequence of the same name.  For a while, mainly the 1980's and 1990's, We Celebrate (before J.S. Paluch fully merged with World Library Publications) used the name "Heil uns Heil, Alleluia" for this very tune.  The text is actually a paraphrase of the "Victimae Paschali Laudes".  Further, this text is not to be confused with the more popular Charles Wesley text that is set with Alleluias to the tunes "Llanfair", "Gwalchmai", and (in some hymnals) "Easter Hymn" (the latest used in most hymnals with the Lyra Davidica hymn, Jesus Christ is ris'n today).
Liturgy of the Eucharist: Missa "Christo Risusciti", Luigi Picchi, and adaptations thereof
Communion anthem: O Sacrum Convivium, Roberto Remondi
Post-Communion hymn: Regina Caeli, Mode VI
Recessional hymn: This joyful Eastertide, "Vreuchten"

The Propers from my Psalm 151 project for use for this coming Sunday (April 10, 2016), the Third Sunday of Easter, Year C

RESPONSORIAL PSALM
Psalm 30: I will praise you, Lord