The flagship site of the Christus Vincit Network has returned, officially!

Just like the old "Christus Vincit - the BLOG!", I will be chronicling my thoughts on liturgy, music, and fun, including the return of the "WTF award" to those who are just utter idiots.

WHY THE NAME CHANGE?

Well, since the time of my last "official" post on the old blog (I kept the link the same, btw, changing only the title; I even kept most of the posts from it since 2005), my family and I moved into an apartment in this beautifully-kept, 175-year-old colonial.  Our now former landlady decided to inform me in broken English, "I have family coming in from out of state, and I want to give them the apartment.  I'm sorry."  Since this is the second time something like this had happened, and both times the owner informing me in broken English, I snarled back, "That's ok!  I'm USED to it!"  So, after looking for apartments for pretty much the entire summer, we stumbled onto this place in September, 2015, checked it out, and loved it.  About a week later, I was surprised, yet overjoyed, nonetheless, to get the call from our new landlord's wife that they were offering the apartment to us.  The apartment, and the house, and the property, are all beautiful, and the neighborhood is much quieter (we live in a TOWN now after decades of city living).

Walking through our apartment is almost like walking through a circle.  What's more interesting is that in between our parlor (some say "living room", my dad used to say "front room") and our bedroom is this little 7' x 7' walkway.  I inherited a small white desk from the previous tenant.  I already had a file cabinet with a bunch of sheet music in it.  My daughter, Brittany, had already bought me a new bookcase for my birthday.  I opted to wait until we move to set it up.  I have since stolen a name that former blog partner (and still Facebook friend) Jason Pennington used for his office in his former parish - the "scriptorium".  This new office is like a new solace for me, and I no longer have to go to opposite ends of the house to get to my printer, my books, my music, or even my hole puncher.  So, my office is officially dubbed "the scriptorium". 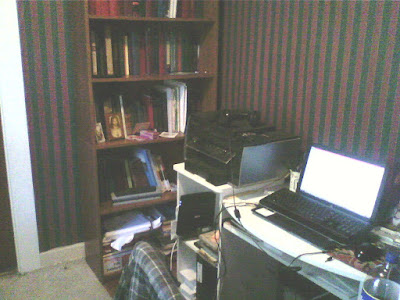 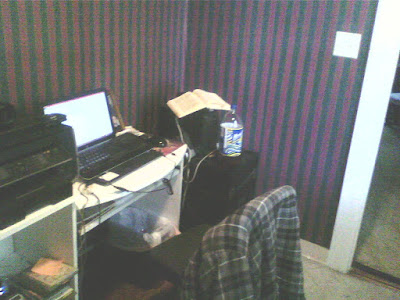 And yes, the flannel jacket (which I got as a gift last Christmas) got it's proper burial on November 18, upon the arrival of my new winter coat (an early Christmas gift from my wife, Ann).

SO, WHAT ELSE ARE YOU UP TO?

I'm also expanding on my on pet project, The New Complete Proper of the Mass.  You can keep updated on that by clicking here.  It includes not only my Psalm 151 Responsorial Psalms and my Alleluias and Gospel Acclamations set, but also contains Introits, Offertories, and Communions that contain, on the most part, shorter, congregation-friendly responses, and utilizes many of the Psalm Tones from my Psalm 151 set.  I am currently finished with everything from Advent through the Baptism of the Lord, and decided to take a break from working on my Ash Wednesday set to write this initial post.  A good number of my Responsorial Psalm settings have been used at Sacred Heart.

WHERE THE HELL HAVE YOU BEEN ALL THIS TIME?

Well, while working diligently on my pet project, I've done most of my posting on Facebook.  However, I have decided to return to blogging as well.  Up to now, I have refused to use Twitter.  I plan on keeping it that way for a long time.  Too open, in my opinion.  Most of the time on here and on Facebook, I'm preaching to the choir.  I know the bulk of my audience (at least, I think I do).  I'd hate to hand out a WTF Award on Twitter only to get retweeted by some immature punk whose knack for run-on sentences, "axing" people, "conversating", and asking "What have you did?" is about as eloquent as a bunch of thugs protesting in the middle of the Interstate.

FINALLY, WILL YOU EVER BE PODCASTING AGAIN?

I do have some new ideas for reviving the iSNARK! podcast, but I will probably need to finish the Propers project before I can concentrate on bringing the podcast back to fruition.  I'm thinking of using YouTube instead of iTunes for posting.

Good to be back on the blogosphere!  Happy Advent!
Peace,
BMP
Scribbled by Brian Michael Page at 10:41:00 PM