Every time we go over to my mother-in-law's house on Thanksgiving Day, after the Macy's parade is done, NBC follows it with a dog show.

Now don't get me wrong, I like dogs on the most part.  I know many don't like me, but nonetheless.  I've gotten much better since I was bitten in the leg by a German Shepherd when I was just six years old.  Took me years to get over my fear of larger dogs.  During those years, my mother got bitten by the convent watchdog while walking with a friend to a line dancing class at the nearby parish school, talk about adding insult to injury.

So now - if there is anyone who raises show dogs out there, please enlighten me on the concerns I bring to this here blog post. 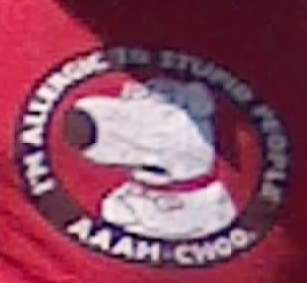 Dress Code for Humans
Is it me, or does there seem to be a dress code for human participants in dog shows?  They all dress up like they're going to a rich person's funeral, or perhaps like they're sitting in the snob seats at the Kentucky Derby.  Not only are they in fancy dress, even fancier than what most (myself included) wear to church on a regular basis, but their suits are nearly an inch thick.  So now we're talking fancy to the point of stuffy.  I, for one, would be sweating like a pig in those suits.  I'd be the one wearing t-shirt and jeans, or my usual daytime attire, t-shirt and sweat pants, namely this t-shirt that I own (see left), which I often save for any trip to any government agency.  For those who do not know who this dog is, his name is also Brian, and he's the Griffin family dog on the cartoon, Family Guy.

Mutts
There seems to be only purebreds on the show.  I've yet to see any mixes.  It's no different from a Polish man marrying a French woman and making children.  I had a daschund-chihuahua mix named Brutus when I was a teen (which really is like calling a cute fluffy little kitten "Killer").  But even beyond that, how about one that's part Bassett hound and part bull mastiff?  (Incidentally, my son Brian, a dog groomer, was telling me Bassett hounds are LOUD!  Really LOUD!)  How about this: a schnauzer with a great Dane?  Is that really possible?

Extra Hair
I get a charge out of the dogs that have all this extra hair.  This makes Brian Wilson's beard look mild (I'm talking Brian Wilson the major league relief pitcher, not Brian Wilson from the Beach Boys).  There are those dogs who I would name "Cousin It" in a heartbeat.  Really!  From the top of their heads right to the floor is nothing but long strands of hair, often covering the eyes to the point where I wonder how the hell they can see!  Then there are the ones whose hair drape down from their backs to the floor, covering all four of their legs.  I feel like you have to lift poor Fido's hair before he lifts his leg, or prepare to wash him down vigorously.

Cats: An Entertainment Necessity
For one to make a dog show entertaining, one must consider the addition (read: strategic placement) of cats to the stage, preferably when the thick-suited stuffy human is trotting across the stage with his/her pooch.  Add for a little distraction.  You can grade the dog on how he/she behaves upon seeing a cat.  Will the dog think nothing of it, or will it be like an old school cartoon scene re-enacted?

Talent
I would have no problem awarding show dogs for their talent - their ability to do tricks.  I know one such dog owner personally who teaches his dog to play piano, shut the door, and much more, successfully entertaining his human company.  Now, I don't expect the dog to jump through rings of fire - that's probably animal cruelty.  Hunting ability could also be considered (see the cat paragraph above - lol).

I realize most of the people who bring their dogs on stage for such shows are probably on the upper tier financially.  But my suggestions listed above will help dog shows be more entertaining to those on a much more limited budget, like most of us.