This morning I decided to go to the 9 AM morning Mass at Holy Name of Jesus Church in Providence. Some might remember that I was music director there from 1999-2003 - four very happy years before being lured to another parish for a $12K raise and a year of unprecedented lies from the pastor that lured me there (including why I was fired). Talk about hindsight being 20/20. My biggest mistake EVER was leaving there!

I would have attended the 11 AM Extraordinary Form High Mass if I hadn't had family commitments this morning. Jacob Stott, the music director and organist, had told me that the schola was to do the Mozart Missa Brevis at that Mass. However, the 9 AM Ordinary Form Mass was also done very well.

In addition to the music list I offer here is some pictures I took after Mass. Please pardon the quality of some of these, as, with the exception of the first picture, I took these pictures with my cell phone (which, mind you, was OFF during Mass). I further invite Shawn Tribe and his team at The New Liturgical Movement, as well as the Musica Sacra people to use these pictures at their leisure. I say this because I do remember some pictures in previous posts at NLM (I'd say at least, if not almost, a year ago). 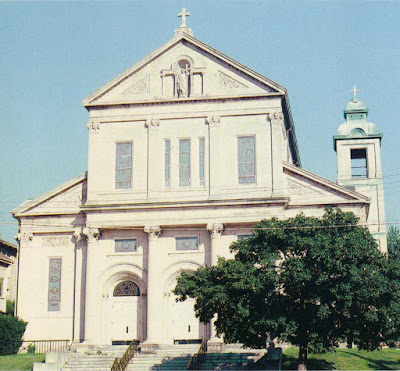 Holy Name is a very beautiful church, completed just around 1900 in a similar style to the Basilica of St. Paul Outside the Walls in Rome. 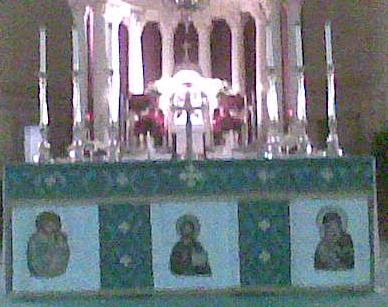 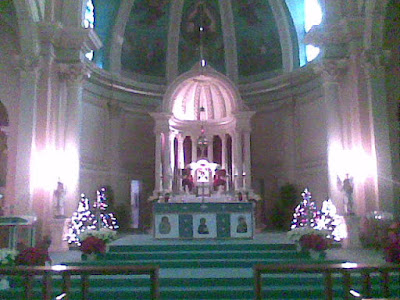 The Latin inscription on the high altar towards the top (hard to see in this picture, sorry) reads PASCHA NOSTRUM IMMOLATUS EST CHRISTUS. This is translated Christ our Pasch has been sacrificed. 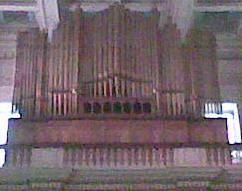 This is the gallery pipe case - one of two organ cases in the main church. This is a 1911 Hook and Hastings organ of 18 ranks, with maybe a couple of borrowed stops, but most of the ranks are independent. Until the mid 1960's, this organ, originally a tracker (mechanical action) was the ONLY organ case in the church. 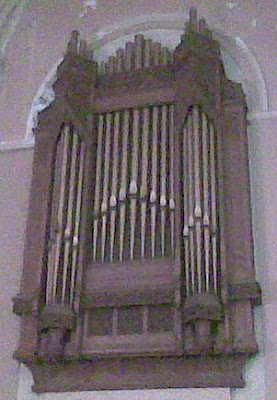 In the mid 1960's, there was a fire at Holy Name that did some damage inside, but, thankfully, the church was not destroyed. At that time, William J. Laws, Jr. (aka "Butcher Bill" to a number of organists and organ builders) changed the gallery organ action from mechanical to electropneumatic, added the above case in the chancel (accessible by a door located about a third of the way up the bell tower), a nine-rank unit organ. He also built a console (using Austin parts - his father had an agreement with the Austin Organ Company) that controls both organs.

Both Sunday Masses (the 9 AM Ordinary Form and the 11 AM Extraordinary Form) are in the Main Church. All of the Christmas Masses were also in the Main Church. The 9 AM Mass was Jacob at the organ and no cantor. The cantor also sang the vigil Mass, and was due in for the 11 AM Mass. Here is the music list for the Mass I attended, celebrated by Father Joe Santos (current pastor), and concelebrated by Father Jude Onochukwu (chaplain for the African Mass community who has an excellent sense of chant - he came to Holy Name about a year before I left there).

O come, all ye faithful...Adeste, Fideles
Psalm was recited (which surprised me, as I ALWAYS saw to it that it was sung, even if I had to sing from the console)
The Mode VI Alleluia was intoned by Father Santos.
The dialog before the Gospel was intoned by Rev. Mr. Alfred Marcello, a parishioner of Holy Name who will be ordained a priest in June. His First Mass will be at Holy Name. It is my opinion that Deacon Al will make a great priest (not to mention he chants very well).
Hark! the herald angels sing...Mendelssohn
People's Mass (Sanctus and Agnus)...Vermulst
Christ Has Died and Amen...Danish
God rest you merry, gentlemen...English
Joy to the world...Antioch

These next two pictures come from the Lady Chapel, which is adjacent to the Main Church, connected by a short corridor. The 4 PM Saturday Mass is celebrated here (with music), as well as most funeral Masses, some weddings, Marian devotions, and Stations of the Cross. 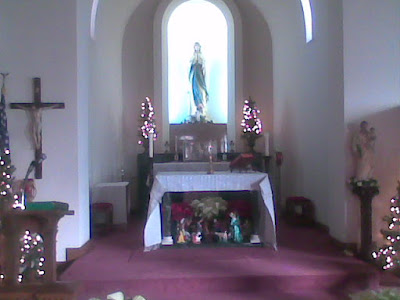 Sanctuary of the Lady Chapel. Note Mary behind the High Altar. 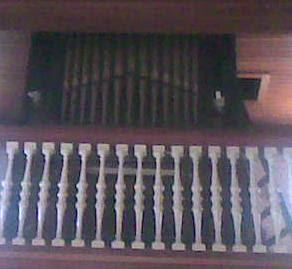 This is the six-rank Hook and Hastings tracker organ in the gallery of the Lady Chapel. Built in the mid 1880's, this organ is still played regularly.

One of the things I pride myself in was that, in 2000, I was able to talk then-pastor Father Kevin Fisette (of VERY happy memory - I also did the Extraordinary Form Mass with him at St. Leo's for a year, remember) into losing the OCP Muzak Issue and getting Worship III. For the one year that we had the OCP Muzak Issue, I used to create hymnal supplements, which the sexton would place in the back of said Muzak Issues (at my request, and Fr. Fisette's support).

One other thing unique about Holy Name, compared to any other parish I worked for as music director, is that the organist who replaced me kept things going as I had them, and in some cases improved on them. Any other parish that I worked for (or in the case of my last two - got sacked from) would hire people to undo whatever I had going.

It was really good to see you....I hope you and your family have a blessed New Year...Thanks for your kind words and encouragement!!!

My pleasure, Jacob. Well deserved! You guys are doing great up there.
Happy New Year to you, the schola, and the gospel choir as well.
Peace,
BMP