Endorsement from the Scriptorium

I, Brian Michael Page, in sound mind and body, hereby endorse Donald J. Trump for President of the United States.  Make no mistake about it.

I should point out, that as much as I support Trump, I'm even 100 times more against Hillary Clinton.

Donald Trump is no saint.  He's admitted to saying such sophomoric lines as "I'd love to get my hands on her p***y" and the like, albeit the video is from over a decade ago that depicted such.  He's got a brashness about him.  But hey, he's not trying to be the Pope.  I do like his stance on borders, tax reform, health care (read: repeal Obamacare), and restoring strength to our nation.  I especially like the fact that he changed his stance on abortion from pro-abortion to pro-life, and he respects religion.  He's surrounded himself with many good people, including his running mate, pro-life Indiana Governor Mike Pence. 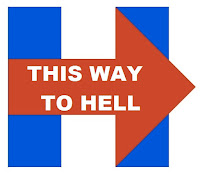 On the other ticket, you have Hillary Rodham Clinton, who, along with her husband Bill and our thankfully-soon-to-be-outgoing President Barack Sadaam Hussein Obama bin Laden, should have been tried for treason eons ago.  Think Benghazi (troops and ambassador killed at Hillary's hands in her capacity as Secretary of State).  Think rigging the Democratic primary in such a way that Bernie Sanders didn't have a prayer (he beat Hillary in the Rhode Island primary).  Think abortion central, as she supports abortions up to the point of a baby's birth.  Think open borders, where just about anyone can easily get into our country, get everything on a silver platter, and for all we know, half of them are card-carrying ISIS members.  A vote for Hillary Clinton will enable her to finish what Barack Obama was trying to do for eight years: turn the United States of America into a third world country!  She's surrounded herself with pure evil.  Her running mate, Tim Kaine, like Hillary, is blatantly pro-abortion.  Unlike Hillary, however, Tim Kaine has the colossal nerve to call himself Catholic (he may have excommunicated himself latae sententiae, but his bishop hasn't spoken up on that matter).  Both insist that the Catholic Church needs to change her views.  WRONG!  The Catholic Church doesn't need to do anything of the sort!

And let's not forget the threats made by Hillary Clinton to her husband's many sexual victims!

Absolutely nothing good will come of a vote for the Clinton regime, regardless of what mainstream media (paid off, or threatened, by the Clintons, of course) wants you to think.  I do think that with Donald Trump, regardless of his brash mouth, we have a prayer.  I feel my soul will be far safer with him than with her.

Three more short points to bear in mind:
1. I have no problem with electing a woman for President.  However, Hillary Clinton is NOT a good example of a woman President.
2. Regarding Bill's sexual crimes: I've heard the line, "Bill's not running for President."  Maybe not, but his wife is, and if she wins, that puts him right back into the White House as well.  What he did while President he'll continue as First "man". (quotation marks intended)
3. I cannot justify abortion for ANY reason.  My Catholic faith dictates so (the same Catholic faith Tim Kaine claims to be a member of, but does a piss-poor job practicing), but even more of a factor is my being a proud father of two sons and two daughters, being a proud grandfather to my little seven-month-old grandson, and my own being adopted as a five-month-old baby by loving parents.