YOU'VE GOT TO BE KIDDING ME!

BSHOBL got the Nobel Peace Prize? WTF? It definitely didn't take the powers that be that long to "think this through", as the man became President on January 20, 2009, and nominations had to be submitted on February 1, 2009, not even two weeks later. Who the hell paid who off?

So, while the Obaminaiton receives his Nobel Prize, I hand out my WTF award to the people who handed him the Prize.

UPDATE: I just got the latest reaction from Sesame Street's beloved Cookie Monster. 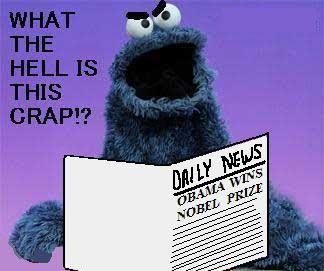 Also (RSCT and a big wet kiss to my wife Ann for this), this from Big Bird...

UPDATE 10/18/09: SteveO has informed me via e-mail that the Obamination has just received the Heisman Trophy after watching a college football game.
Scribbled by Brian Michael Page at 8:01:00 AM

There are my favorite responses:

"Was he the tenth caller or something?"--quoted by Maria Compton-Hernandez

"Opened up a Crackerjack box and got a nobel peace prize. Darn I was hoping for some piece of crap plastic toy."--Curt Jester

"he won for the Beer Summit" --Carl Schaad

That's ok Rich. One of the teachers at my son's high school was heard by my son saying to his teacher: CAN YOU BELIEVE THIS CRAP? in response to same.
BMP