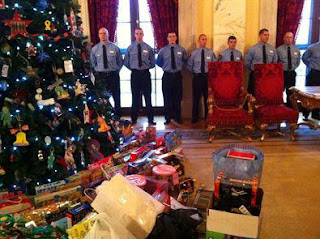 Can you believe our frickin' nitwit governor wants to omit Christmas altogether in this year's State House tree-lighting ceremony???!!! Yeah, we're talking Rhode Island's Lincoln Chafee, a former Republican who turned Independent, the man who got in despite 65% of the voters voting against him (seven people ran; I voted for John Robitaille, a Republican, who came second). Chafee, son of the late great John Chafee who's probably rolling in his grave watching Linc's antics unravel, plans to call the Christmas tree a "holiday tree".

Now, just WTF is a holiday tree? And what holiday do we put this up for? Arbor Day? Valentine's Day (Look, honey, I got you a tree for Valentine's Day!)? Mother's Day (Look, mom, I grew this with my magic beans!)? How about Ides of March Day? That would be a hoot, wouldn't it?!

So, by the power invested in me, by me, and by the readers of this snarky little blog I write, I hereby award the (Dis)Honorable Lincoln Chafee, Governor of Rhode Island, the Christus Vincit WTF AWARD for December 2011. Oh, and um, Merry Christmas!

Incidentally, John DePetro of WPRO Radio (AM 630) is looking to start a flash mob to sing "O CHRISTMAS TREE" at the State House, 5:30 PM, Tuesday, December 6, the Feast Day of Saint Nicholas. If you're near the area, come join the mob! 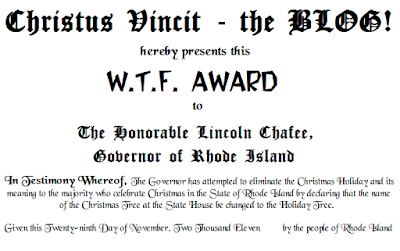 Well, Back in 2002, City Hall wanted to go PC and call the Christmas Tree a Holiday Tree.

The biggest proponents for calling the Christmas Tree a Christmas tree were the Non Christians.