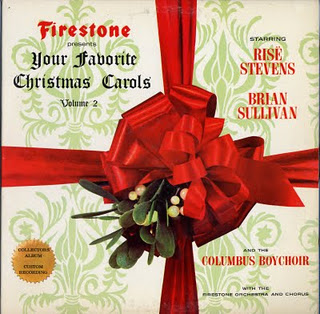 One of the most complex arrangements of The Twelve Days of Christmas that I've ever heard comes from a 1963 album that Firestone distributed called Firestone Presents Your Favorite Christmas Carols, Volume 2. (Yes, the album is a year older than I am!)

The album in this discussion features Risë Stevens (mezzo), Brian Sullivan (tenor), the Columbus Boychoir (now the American Boychoir, since their 1980 move to Princeton, NJ), along with the Firestone Orchestra and Chorus.

There are twelve tracks on the album, songs done by each of the "stars" on the album. You can even sing along, as the lyrics are on the back of the album jacket. The album ends with The Twelve Days of Christmas, performed by (as appears in the credits) "Entire Company". Yup - everyone on the album! And to boot, each verse has its own arrangement, vocally and orchestrally - a different color to each verse, pretty much. Several key changes as well!

Get the entire album here!

Thanks for dropping by the blog.
K