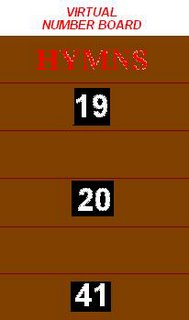 
ABOUT THE MUSIC:
The Introit hymn I chose (O come, O come, Emmanuel) is that of a seasonal nature, but follows a bit of tradition on this Fourth Sunday of Advent. From December 17 through 23, each of the "O" Antiphons, of which the hymn is based, was traditionally associated with a date. Verses 2-7 were associated with December 17-22, respectively, and Verse 1 (yes, "Emmanuel", though invoked first here was actually the LAST of the antiphons) was associated with December 23. In the case of this Sunday, the 18th, Verse 3 will be used for sure. In the case of the Saturday Mass (the 17th), well - the Saturday Mass is the anticipated Mass for Sunday, so, the Sunday date applies here.

The Introit appointed in the Gregorian Missal has this for an antiphon:
Rorate caeli desuper, et nubes pluant iustum: aperiatur terra, et germinet Salvatorem. (Let the clouds rain down the just one. The earth will open and bring forth a Savior.)
In addition, the verse, when translated is:
The heavens declare the glory of God, and the firmament proclaims his handiwork.
For this day, we have separated this into two seperate hymns: 1) Rorate Caeli, whose antiphon is actually part of the Introit antiphon, and 2) The Worship of God in Nature, which incorporates the verse. The beautiful setting of the latter, by Ludwig van Beethoven, has this for a text:
The heav'ns are telling the Lord's endless glory; Through all the earth his praise is found.
The seas re-echo the marvelous story, O man repeat the glorious sound.
Who made the numberless stars of the heavens, who from his chamber leads the sun,
He comes rejoicing and laughs from afar off, a hero strong his race to run,
A hero strong his race to run.

I first heard the Beethoven piece when I was about 11 years old and thought, "Wow! This is glorious!" The opening line also works for Christmas. Paraphrase the opening line with the Gospel passage where the angels, upon the birth of Jesus, sing Gloria in excelsis Deo!