SOME PICTURES FROM THE CONCERT

My wife Ann took some pictures at tonight's concert. Some may be a little fuzzy, as her camera is pretty much on her last leg. Please bear with me.

A better shot of the choir, and my ugly mug (hehehehe) 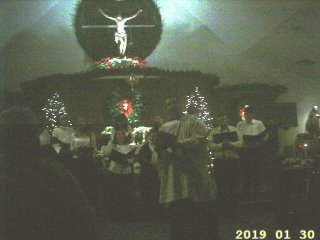 St. Teresa of the Little Flower and our Crucified Lord looks over Reuel and me (I'm on the right; Reuel, my guest accompanist, is on the left) 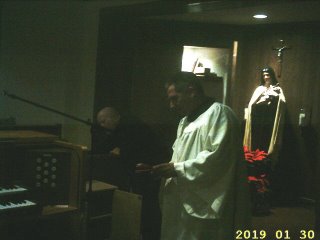 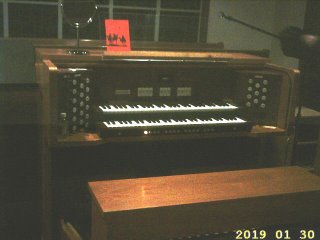 The choir, directed by yours truly. It kinda looks like it's seen through bifocals, but that's my wife's flash, half shattered. I really have to get her a new camera. 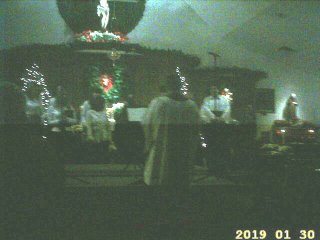 I'll have some sound clips on the next post. Right now they're saved as .wav files, but I need to convert them to .mp3 files. Some of the clips may even be part of my next podcast.
Everyone pulled through tonight. Everything went wayyyyyyyyy beyond my expectations. Attendance was far better than expected, and a lot of happy people greeted the choir and me out the door. The choir was at its best ever!

Special thanks to the choir for its hard work, commitment, and devotion, to Mike Alves and the Tiverton High School Honors Band, Reuel Gifford for his top notch accompaniment (he's as humble as they come, but he was at his usual - great!), Father Jay Finelli, my pastor, boss, and now fellow podcaster, for his tireless support and encouragement, and to all who attended. I can't remember when the last time was that I was this moved. I was dang near speechless.

One shocking note: When I first wrote "Rejoice in the Lord Always", I expected it to run about 4 to 4-1/2 minutes long. When my wife did the audio, also from her camera, little did I ever believe until today that, even with the first measure truncated by the camera, the piece turned out to be six minutes long! 5:59 to be exact! Figure about 6:04 before the minor truncations. That makes for THE longest piece of sacred music I've ever written. Breaks my record of 1999 with "Christus Vincit", which was 5:33. I nearly fell back in my seat when I saw the timing on my wife's media player.

I bet it was lovely.
P.S. Does your wife's camera see into the future, all the way to the year 2019?
Because that would be cool. :)

I wish. She actually noticed the date error before I did, but I said the heck with it. What I posted, I have posted. :-)