The Hoffmann Gets A New Console 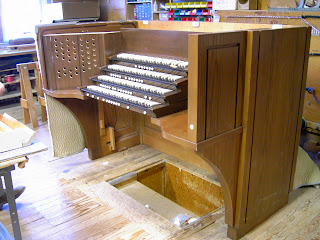 On Tuesday of this week (April 17), the technicians from Schantz will arrive in Lafayette to install the new 4 manual draw-knob console at Fatima Church. The old Organ Supply console ("made in Taiwan"), "stop tabs" and all will be scrapped. Stop Drooling, Nick and Brian. Check out all those pistons...sure beats the 10 (only ten, count 'em, ten) the old Matel console had (actually, it only had one that worked, #10, and I used #1 as the general cancel, since the contact in the actual general cancel had burned off so many times, there was only a tiny nub left under the piston cap). By the way, the picture at the left was taken a week ago or so in the Schantz workshop. No, this is not an NPM model for short hippie women who don't know how to play a pedalboard. There is a nifty pedal board, but it's just not shown here. In addition to the new console grooviness, the Schantz guys will be moving the Subbass 16' from the main chamber to the choir chamber in order to create a new, safe opening into the swell box that will access the swell reeds for tuning. At present, the opening is high on the back of the box, and the tuner has to lie prostrate on a plank and work almost entirely by feel. The console will be installed in the the organ's original console location, in the choir oratory just off of the sanctuary. The choir of course will also be located here, giving us singer and organist types a real front row seat on Calvary. Grooviness abounds. The Vadicun Too "Choir must partissipate in assemblage activity" funhouse play zone down in the nave will remain the home of the Schimmel baby grand to be used for concert events. We will be planning an Alte Kapelle style organ dedication in the coming months. Instead of the d minor Toccata and Fuge, the Bach "Wedge" is on tap. I'll post pictures of the new console in its new home after the installation is complete.
Scribbled by Jason Pennington at 9:05:00 AM

Email ThisBlogThis!Share to TwitterShare to FacebookShare to Pinterest
Tags organs, Our Lady of Fatima Church

Seriously - that console kicks butt. I like the reversed colors on the manuals. The IV/120 Casavant tracker (detached console) at our cathedral is like that. Good luck with it!
BMP