The stoplist of the organ at Saint John the Baptist, Pawtucket, Rhode Island.

The date of the organ is arguable at this point. Daniel Lemieux, on his website, says 1924. Fr. Jerry Harbour, the pastor, says 1927. Fr. Jerry may have the more accurate statement here, since the cornerstone of the church says 1925. So, I'll say mid to late 1920's and be safe on all ends. :)

The other error on the Lemieux website is that it also listed stops for a solo division. The organ at St. John's does not have a solo division. However, another organ on his portfolio, the Casavant at St. Anthony of Padua in New Bedford, Massachusetts, does, and the stops in that division may be from that organ.

One interesting note is that this the first three-manual organ I've ever played that has absolutely NO mixtures, and absolutely NO mutation stops, definitely something rather unbecoming of a French-Canadian built pipe organ.

So, without further ado, here is the stoplist for the organ at St. John's... 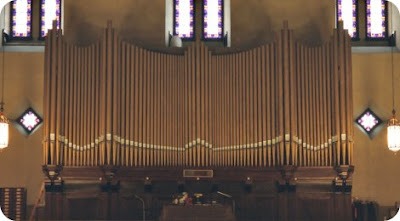 Orchestral:
Flute Double Ouverte 8' / Violoncelle 8' / Viole Sourdine 8' / Violes Celestes 8'
Flute d'Amour 4' / Tuba 8' / Hautbois Orchestral 8' / Voix Humaine 8'
Tremolo / Harpe Celeste
(Note: I found the "Orchestral" naming rather interesting, in place of "Choeur" or "Positif". But then, I served a Woonsocket church back in the early to mid 1980's with an late 1920's Estey organ that labeled the pedal division "Universal".)

Pedale:
Resultant 32' / Flute 16' / Bourdon 16' / Gedeckt 16' / Bourdon Echo 16' (lieblich action)
Flute 8' (ext. of Bourdon) / Bourdon Echo 8' (ext.) / Bombarde 16'
(Note: I love the thickness of the 32' Resultant on this organ. It's very reminiscent of the resultant I often hear on the 1972 IV/125 Casavant tracker at the Cathedral of SS. Peter and Paul in Providence. I often use this resultant for final verses of the entrance and recessional hymns, as well as postludes.)

Another note: the two "anches l'evres" (the Hautbois on the Recit and the Trompette on the Grand Orgue) are excellent chorus reeds.

The late Paul Martin, who served St. John's as Organist and Choirmaster for 19 years, had counted 31 ranks. I'm counting 34 ranks, but it's possible that the Pedal 16' flute could have been borrowed from the Grand Orgue or Orchestral, the Pedal 16' Bourdon could have been borrowed from the Recit, and the 8' Violes Celeste could be the same rank on both the Recit and Orchestral, thus the count of 31.

At any rate, the organ at St. John's is currently the largest working pipe organ in any Pawtucket Catholic church. Close calls are St. Mary of the Immaculate Conception (Austin, III/25) and the former Our Lady of Consolation (Casavant, III/24). St. Cecilia's is a III/40 Kimball, but that organ hasn't functioned in nearly three decades, though there has been talks of restoring it.

The other Pawtucket Catholic churches:
St. Leo the Great: an old two-manual Allen from 1962 (yeah, in electronic organ years, an organ built in 1962 is a dinosaur, while a pipe organ of the same age is still fairly new)
St. Edward: a two-manual Lane
St. Joseph (now Holy Family): a three-manual Rodgers analog electronic
St. Anthony: has no organ, from what I've heard
the former Sacred Heart: a two-manual Austin, I believe, of about 16 ranks
St. Teresa of the Child Jesus: a two-manual Allen of a vintage similar to St. Leo's
Immaculate Heart of Mary: I've never been in that church, but it's not a big church at all, so I can imagine the organ (if any) is not so big either. This is a parish that was established in 1979 for Cape Verdean Catholics, using a building that used to be a Jewish synagogue.
St. Maria Goretti: a two-manual Allen, I believe.

BTW, after a very strong impromptu improv on Hymn to Joy as a postlude this morning, I looked up and said, "Paul, this one's for you, buddy!"

I hope all is going well with you, Brian.