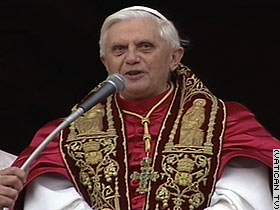 The Catholic Church has reason to rejoice. At about 12:45 PM EDT yesterday, Cardinal Jorge Medina Estevez appeared at the balcony, called out in several languages, "Dear brothers and sisters", and made the announcment: HABEMUS PAPAM (Latin for "We have a Pope"). As I sat on my couch waiting to hear the name, fingers crossed, he announced the name of Cardinal Joseph Ratzinger, Pope Benedict XVI.

When I heard the name Ratzinger, a name that a few friends on an invite-only listserve and I share were rooting for, I shouted out "YES!" like I was rooting on the Red Sox to smoke the Yankees (yes, I am an avid Red Sox fan). My wife didn't know what to make of it, as she was in the kitchen, and I was in the parlor. Then I told her of the great news - that the defender of the faith was chosen to be our new Shepherd, the new successor to Saint Peter.

He is not only the renowned defender of the Catholic faith, as he had shown in being the Prefect for the Congregation of the Doctrine of the Catholic Faith, the right hand man of his longtime and great predecessor, Pope John Paul II. He is also a defender of orthodoxy in the Sacred Liturgy as well, and is a defender of sacred music at Holy Mass. I had downloaded his 1985 document "Liturgy and Church Music", but I'm trying to find a way to upload it to this blog, or at least try to remember the source I downloaded the dang thing from. So as soon as I get the answer I want, I'll present it here.

Pope John Paul II made many statements on liturgy and music as well. Pope Benedict XVI may just be the one to be the "enforcer". Let's hope.

Anyways, there are reasons the Holy Spirit selected the man he selected to take the Throne of Peter. Those reasons are known only by the Holy Spirit himself. But personally, I am rejoicing greatly that we now have Pope Benedict XVI. In fact, at the senior choir rehearsal I ran last night, the entire choir was rejoicing, and all fans of our new Pontiff.