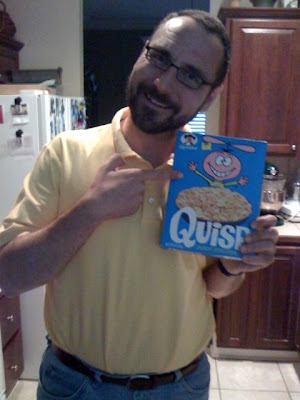 A friend of mine was shopping at the Youngsville Dollar General on Monday and found a box of breakfast cereal that he knew would wrinkle the time-space continuum which surrounds my fondness for transcending retro grooviness. For a dollar (obviously) at D.G., one can purchase a modest little box of Quaker Quisp. The stuff is a magical flashback to 1972. Quisp aficionados will recall the cereal from the 1970's, and that it had vanished from store shelves some time either in the late 70's or early 1980's. The cereal is now available once again in limited distribution at D.G. stores since the beginning of 2008. As soon as I saw the box, I remembered the original cartoon commercials for the stuff with the little pink alien who was able to fly using the handy propeller built into his head. He's also pictured on the box. I hadn't thought about Quisp in decades. Actually, seeing the box (still the same retro styling, but of course with fresh, new cereal inside) was also a revelation to me too, since when I was a kid, I thought it was called "Crisp". Here's a pic of me in my kitchen transfixed by the sword of retro grooviness holding my newly purchased box of Quisp (my black and white adidas sambas didn't make it onto the picture, but if they had, they, besides the nifty cereal box, would have further proven my discipleship of all things retro and utterly groovy). Ok...time to catch up of tevoed episodes of Scooby Doo.
Scribbled by Jason Pennington at 1:31:00 PM

Heilege scheiße! I haven't seen Quisp since I was Brittany's age (10). Now they need to revive Quake - oh, and Freakies.
BMP

:-) You are hilarious, JP! I've never heard of Quisp before ... makes me want to go to the local DG and find it. Just out of curiosity, of course.

Ah yes. Quake, the sister brand of Quisp with the little miner character. I still haven't broken into my box of Quisp. I might eat some this morning for breakfast, though.

My sister & I were more Frankenberry & Booberry fans. You're too funny!

Jason missed Quisp, while Brian and I are still upset at not being able to get Alpha Bits.