AN ORGAN HOPING TO BE RESTORED

Taken from the website of St. Cecilia Church in Pawtucket, just a block away from St. Leo's where I play the monthly Extraordinary Form Mass - a story on a Kimball pipe organ that went south in the 1980's (again - the '80's), only to have a Hammond take its place. In recent years, the parish has been looking to raise funds to have the Kimball organ restored.

Mozart proclaimed the pipe organ the “King of Instruments.” For centuries it has been the chosen means of musical support and inspiration for the church. It is the largest of all musical instruments and can speak with a whisper or a roar. The organ alone can produce both the highest and lowest pitches perceptible by the human ear.

The St. Cecilia historic pipe organ was built in the theatre-organ style and began life accompanying silent movies or for musical entertainment at a private residence. It was built by the Kimball Piano and Organ Company which was founded in Chicago in 1857 and is well known for its organs in St. Patrick's Cathedral NYC, the Atlantic City Boardwalk Ballroom, and the Mormon Tabernacle. The Kimball company's work was famous for its dedication to quality. In the words of one organ builder "Where others used four screws, Kimball used eight. They used silver on their key contacts and high tin content in their pipework. "

Kimball most likely built this organ in the in the early twentieth century. In the 20's as "talking pictures" were developed, many theaters sold their organs to churches and funeral homes. Many of the instruments did not survive.

Employed by Kimball as a sales associate was George Stanley, whose summer home in Bristol was neighbor to another belonging to the St. Cecilia's pastor at the time, Rev. Mathias A. Hebert. Reverend Hebert was the second pastor of St. Cecilia's, but was the first pastor of the 1935 church which exists today. When the organ was acquired circa 1950 Rev. Hebert hired organ builder Raymond Whalon to install the organ and transform it from theatre to church organ. As early as the 15th century liturgical pipe organs have specific ranks (sets of different sounding pipes) which combine together to create the unique organ timbre everyone recognizes.

Raymond Whalon had a long history in the profession. He studied voicing techniques with the pipe voicer of one the greatest organ builders of all time, Aristide Cavaille-Coll of Paris, France. Cavaille-Coll was the Antonio Stradivarius of organ builders. Whalon and his wife Marthe co-founded the the Welte-Whalon organ company of Portsmouth, RI. To complete the transformation, Whalon added almost 400 new pipes in three ranks of diapason (8', 4' and 2'), a four rank mixture, a bourdon, and string pipes. This addition to the existing pipework put the total number of pipes over 1,250. The console too was in the theatre style with a Wurlitzer-like wrap-around bolster. Whalon re-built the mahogany case to a traditional console design. The keyboard layout was changed from four manuals (keyboards) to three that correspond to the pipework organization familiar to church organists.

Following the installation, masses were played by Sisters Jeanne and Rose Soline until a permanent organist could be found. Reverend Hebert and Raymond Whalon were champions of the organ and saw to the organ's tuning and upkeep. So protective of the pipe organ was Rev. Hebert that he forbade budding organist Betrand Massé from using the organ until he completed organ lessons with C. Alexander Peloquin. Bertrand Massé fulfilled the requirement and became the titular organist at St. Cecilia's where he excelled in the position for 39 years.

Bertrand Massé brought the church's music program to the height of its glory. In the years following his arrival, the choir grew to an unsurpassed size. The pipe organ was the largest in the area and together they touched parishioner's spirits while accompanying countless masses, confirmations, weddings and funerals.

The technology of organ building was fairly advanced at the time. The console and organ use electro-pneumatic. The unit windchests use pitman stop action. As technology progressed some parts of the instrument have not changed. Better quality materials are available today, but the base materials themselves are metal, wood and leather. Every space-age substitute has been put to the test but these basic durable materials have stood the test of time. With climate conditions and low pollution, the leather used in the reservoirs and pallets of an organ can last for several generations. The leather on the St. Cecilia organ would be at least 60 years old. Dry leather, dust accumulation and the settling of the softer lead pipes are side effects of the aging process normally handled by routine maintenance.

Rev. Hebert left his post in 1967 and his stewardship of the organ had no successor. This left Whalon without an ally in the church administration. The maintenance cycle eventually came to a halt. The organ first showed serious signs of aging in the 80's. Stuck notes (ciphers) and silent pipes became a problem. The parish was growing in new ways and the care of the instrument was put on hold. In the late 1980's an organ student was allowed to enter the organ chambers for the purpose of maintenance. The student did more harm than good, leaving the organ in a barely playable state and making it clear that the upkeep was too difficult for an amateur to handle. It was shortly after this event that the choir was for the future accompanied by a small, electronic substitute organ.

Between the years 1997 and 2003 an organ fund was initiated and many parishioners contributed. The future looked promising again but was short lived. The fund was appropriated for other uses. In 2006 Bertrand Massé passed away after a 39 year tenure at the church. His loss was devastating to many, and the St. Cecilia's choir dwindled to a minimal size. Tragically, Raymond Whalon died later the same year— only months after he happily accepted an invitation to revisit the St. Cecilia organ. Interest in the pipe organ again was rekindled by several church and community individuals as a memorial to Bert Massé. A preliminary inspection of the organ by an established organist and former organ builder from Providence. The console and pipework were surveyed by Henri St. Louis and documented by a member of the Organ Historical Society. A replacement blower was found and purchased with funds given by a private donor. The original blower was located in a special room in the church hall and was able to quietly push wind up to the pipes two floors above. The original blower was discarded to enlarge the men's restroom in the church hall. The new blower can be directly connected to the ductwork in the organ chamber. Once the blower is reinstalled a more detailed assessment will be possible.

Pipe organs have a long life span of music making when cared for as evidenced by instruments in Europe dating 300-400 years old in perfect playable condition. The condition of St. Cecilia's pipe organ is far from terminal. The historic instrument has weathered neglect and a little misuse, but is intact and whole— nothing compared to the damage suffered by French and English churches bombed during World War II. Some of these organs are still play today. It is evident when visiting Europe that it places a high value on history. Works of art are cherished and the people take an active role in preserving them.

With the help and dedication of caring people, the St. Cecilia organ can once again be returned to its former glory. It is a sleeping beauty awaiting only an awakening kiss. 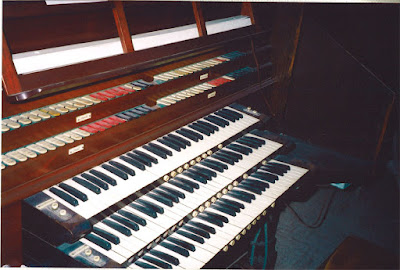 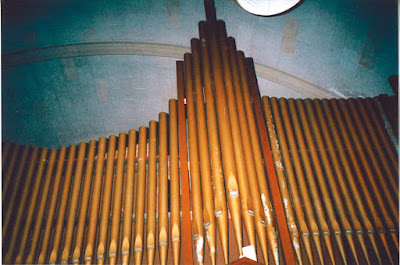 A PS from BMP: Here's a link to the stoplist. It doesn't include the pedal, however.
Scribbled by Brian Michael Page at 8:49:00 AM