Snarks stand up to Gustav. Vienna Sausage and Batteries are in the Bag. 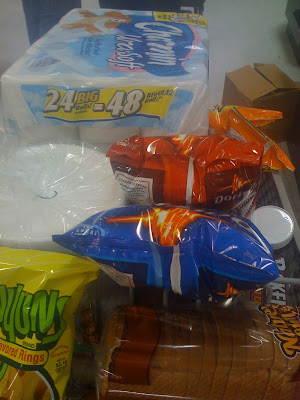 A week ago today, we were watching the local news and the general reportage of the Weather Channel. Just a reminder: I live in Lafayette which is to the EAST of Lake Charles. One national news service reported that Laf was to the south of Lake Chuck. No dice. Atlantis lies to the South. Around 4pm, the SUV was fired up for a journey to the Walmart on Pinhook Road for junk food, D batteries and gallons of water. Collectively, these items are officially termed “hurricane provisions” or “hurricane supplies”. Other than the sheer terror involved in riding out a storm, hoping the neighbor’s bird bath which he failed to secure doesn’t come crashing into the dinning room to destroy the Thomasville Bogart bar and break the martini glasses and spill the absinthe, hurricanes are good for one thing: 12 hours of unabashed, relentless, and wanton eating.
The Walmart was packed with people pushing shopping carts brimming with Little Debbies, Ding Dongs, Doritos, Ruffles, pork rinds, Cheetos, cheese-n-crackers, #10 cans of cashews and peanuts, flats of sodas and boxes of bottled water. Floating atop almost everyone’s cart (replete with chattering right front wheel): a giant 8-roll Bounty and a Family size 24-roll toilet paper with the happy bear cartoon emblazoned on the package. During a binge-fest, you know someone will spill a coke on the rug, and at some point, all those tasty eats have to escape.
The Little Debbie display had been plundered. All that was left were boxes of weight watchers penny-sized muffins and other dietetic dessert-like items. Stress eating requires high suger, high carb. The only points we’re counting now is the hurricane categories, while the weather men count Haitian corpses in hopes of higher ratings to scare their viewing audience shitless to ensure their faithful viewership.
By the time we reached the middle of the grocery section of super Wally, the cart was already over half full of diet-breaking munchies and 5 flats of Dasani. I had one thing in mind: Vienna sausages and herring steaks. I love my Viennas. I love my herring. Always have since I was a kid. I don’t buy them usually, unless for a hurricane. No one does, I think. Potted meat is another fav of mine: ground tripe and pig lips suspended in gelatin. Enough salt in one tiny can to make your fingers swell up into the Graf Zeppelin. Take with a warm coke chaser to swell the bladder for a matching set. Spam, the original canned meat product, is never on our list. Was once, not any more. The gag-factor is simply too high. That sucking noise the amalgamated hunk of pork makes against the can-snot upon opening and turning out mystically enables even the hungriest of starvation victims to offer up his growling stomach in sacrifice.
We heaved the rattling cart into the canned meat aisle: Rome after the Huns. Enormous jars of pickled pigs’ feet dominated the empty shelves. No Viennas, no potted meat (didn’t need the PM anyway – had enough left over from Rita: canned meat doesn’t have a shelf life. It has a half life). Gelatinous meat is alright, but not gelatinous hooves. I was crestfallen. They did have my herring steaks, however. Just 7 left. I got ‘em all. They were on the top shelf and hiding in the back. The little round short stop shoppers missed them. I’m 6’3 and spotted them straight off. They were mine.
Walmart had only C batteries. Flats and flats of them. And double A’s. The maglights required D’s, and so did the back-up set for the boom box. The quest for provisions would not end here. It was off to Albertson’s on Kaliste Saloom and Ambassador.
At Al’s we hit the mother load. Everyone had descended upon Wally’s and stripped them clean. Al’s was moving at a slow, dignified pace with packed shelves and bins right at the entrance filled with D-sized Energizers. Bingo! We bought 16. Al’s also had several flats of my Vienna sausages, and the zip lock bags we needed to pack documents and such and a giant jar of Jiff peanut butter. Self check out. The standard nosey checker lanes had lines to the meat department – in an attempt to be friendly and interactive, checkers will often ask pointless questions: “You like Vienna sausages?”, “Getting ready for the storm?”, “Batteries low?” Self check: no waiting, no inquiries. Clicking off the potted meat, the computer froze. Always happens here. Either it protests when you take the bag away, or it freezes when you’re scanning multiples. We had multiples. With assistance from a helpful clerk, we were out relatively quickly to get home and start securing the courtyard furniture, the fountain, the potted plants, and anything else that could make our insurance go up if it took flight without a permit. 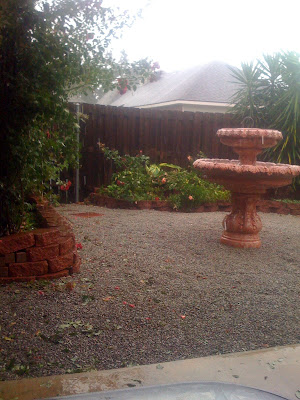 The day of the storm was rather uneventful, until the wind started picking up. And that’s about all the storm was here for us: wind, stronger wind, major wind. Not much rain at all. Wind. The power left several hours into the storm, and returned the next morning around 9:00. We had the fountain up and running in the courtyard by 10, taking breaks between cloud bursts, that continued for the following couple days. Rainwise, the days after the storm were more eventful. Tornadoes touched down frequently the day after, as the “east side” of the storm swept across the state. By the time the eye had approached, the storm had weakened enough that there wasn’t really a “second act” to the show – after the quiet of the “eye”, the winds reverse and all hell breaks loose again, but in the opposite direction as the bottom half of the rotation passes over. That never happened, and the birds returned. No trees snapped in our neighborhood, just a load of leaves and tiny twigs combed from the branches.
Now, pretty much everything around here in this area is back to normal. Many regions were much harder hit, since the storm had not weakened yet, or because they had been hit by tornadoes. For many, the power is scheduled to be out for almost a month. By the time their electricity comes back, we will have eaten through the Doritos, spilled our way through the Bounty, and wiped our way through the Charmin.
I wonder what it would take for people to buy those jars of pigs’ feet?
Scribbled by Jason Pennington at 4:07:00 PM