TRUE STORY: The Vatican is on the verge of forming a soccer team (that's "football" if you're in most countries outside of the United States).

Tarcisio Cardinal Bertone had this to say:
"If, for example, we were to recruit Brazilian players from our pontifical universities we could set up a great team," Bertone was quoted as saying by Rome daily La Repubblica. The cardinal added that the Vatican could also discover young talents in parish teams saying that "in the 1990 World Cup I noticed that 42 players from different national teams originally came from parish recreation centres."

ON A FUNNY NOTE: The Curt Jester has captured two Popes trying out in sports. 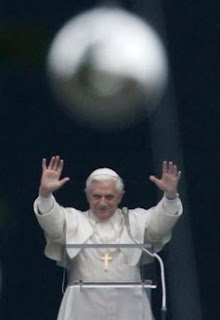 Pope Benedict XVI en route to making a superlative save in his tryouts for the Vatican soccer team. Will he be their starting goalie? 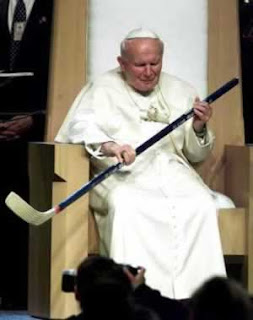 Pope John Paul II awaits his turn to take to the ice in a good clean hockey game. Unfortunately the VHL (Vatican Hockey League) never made it off the ground.

American football might be a possibility, and over at the Curt Jester, the Vatican Cardinals might just be a winner. After all, they thrive on Hail Mary passes. Here's their helmet: 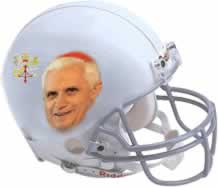 As the church generally operates in a careful manner, with the occasional bursts of energy and passion, I would suggest that cricket be the sport of choice for the Vatican. If they have ever heard about it, that is...