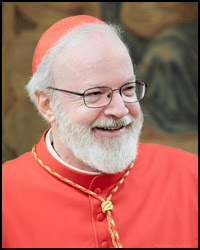 Cardinal Sean Patrick O'Malley, Archbishop of Boston, whose Red Sox swept Archbishop Chaput's Rockies in the 2007 World Series, 4 games to zip. The Sox won their first two games in Fenway 13-1 and 2-1, then won at Coors Field 10-5 and 4-3.

If I'm not mistaken, Cardinal O'Malley is the first Franciscan prelate to have a team within his See win a World Series.

Oh, and while we're in Cdl. O'Malley's jurisdiction, what about them Patriots, eh? They not only smoked Archbishop Wuerl's Redskins FIFTY-TWO TO SEVEN, but they set an NFL record for having the most consecutive games where they've scored 30 points or more!