Who the heck is Uta?? Christus Vincit tells you... 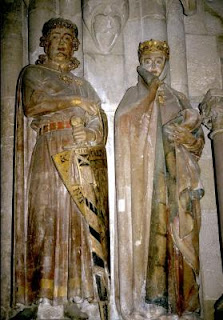 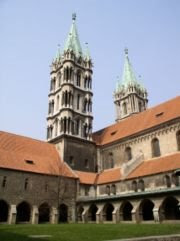 Here's the scoop: We reported yesterday on the exhibition of relics and religious articles in Halberstadt and mentioned that, as part of the re-opening exhibition, articles from Naumburg cathedral are also among those displayed. That cathedral is almost always identified with the statue of Uta, Gräfin von Ballenstedt (the duchess of Ballenstedt) and her husband Markgraf Ekkehard II, both of whom died in 1046, or sometime around then. Besides the fact that her name is a three-letter box filler in almost every German crossword puzzle in print since probably the 11th century, Uta and Ekkehard both count among the 12 patrons who enabled the construction of the cathedral church in Naumburg. I don’t think there is a single German around who would not recognize the immortalized face of Uta. Art Historians of any nationality will know her face as well as they know their own, especially how she lifts her collar up to her right cheek. Also pictured is a photo of the Romanesque/Gothic Naumburger Dom.
Scribbled by Jason Pennington at 8:34:00 AM

Email ThisBlogThis!Share to TwitterShare to FacebookShare to Pinterest
Tags relics

Grafin is countess. Duchess would be Herzogin.

Thanks so much for the clarification, Father! To me, Graefin, just means "Graefin". and Herzog is just "Herzog". The names of nobility are like the names for birds and plants. You know them for what they are in whatever language. On the fly, I usually have to describe them to people to get the proper word, or just look them up in the Brockhaus and hope for a picture. It wasn't until college that I realized that the Wisteria plant wasn't pronounced "Visteria", and a "Durchschlag" was pronounced "COL-lander" and not "col-LAND-er". LMAO!