Not by Catholic clergy (thank God).  At my parish, you won't get ashes without going to Mass.  However, clerics the Episcopal Diocese of Rhode Island are visiting Kennedy Plaza in Downtown Providence to do just that - "Ashes to go"!

My son Chris, while awaiting a bus to work, managed to get a pic of the action this morning and send it to me.  My wife Ann read a story online last night that this was going to happen. 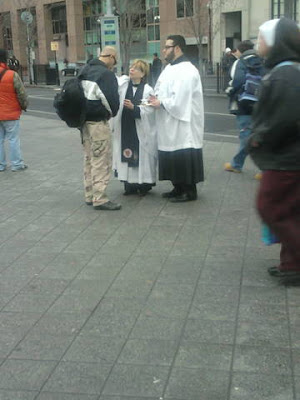 Had the priest called herself Catholic, I would have thought "poncho lady", but these truly are Episcopalian clergy, so I won't poke fun.  I only use the "poncho lady" title on those women who claim to be Catholic priests.

While on the topic of Ash Wednesday, the radio station I listen to most often (WROR-FM 105.7 Boston) issued its tip of the day on the Loren and Wally morning show: DON'T WIPE THE DIRT FROM PEOPLE'S FOREHEADS TODAY.  (Incidentally, how many locals remember the late Salty Brine?  Wally from Loren and Wally is his son!)