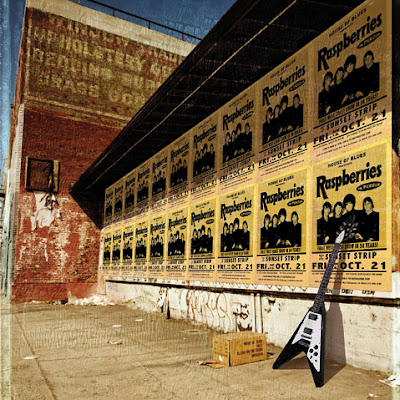 Pictured on the lineup of posters: Raspberries, as they appear on their first album, which was self-titled (L to R: Dave Smalley, Wally Bryson, Eric Carmen, Jim Bonfanti)

For the first time in over 30 years, Eric Carmen (rythym guitar, piano, keyboards, vocals), Wally Bryson (lead guitar, vocals), Dave Smalley (bass, vocals), and Jim Bonfanti (drums, vocals) - that is, my favorite band of all time, RASPBERRIES - performed on stage their classic hits (Go All the Way, I Wanna Be with You, Overnight Sensation, and then some...) and more on a reunion tour that took them to House of Blues and BB King's venues from coast to coast.

The last stop on the tour, the House of Blues in Los Angeles, is the site from where Raspberries' first live album ever (and first album since 1974 - sorry, I don't count greatest hits compilations) was recorded. That album, Raspberries Live on Sunset Strip, just got released today by Rykodisc. I don't know about other record stores, but I found one at the local FYE.

For those who don't know who Raspberries are, they were THE essential power pop band of the 70's. They released four albums (Raspberries, Fresh, Side 3, and Starting Over), and some great singles (Go All the Way, I Wanna Be with You, Let's Pretend, Tonight, and Overnight Sensation (Hit Record) amongst them). These are the guys whose music got me into music to begin with.

After disbanding in 1975, Raspberries frontman Eric Carmen, who was lead singer for more than half of the material on their albums, went solo and did quite well also, scoring hits like All by Myself, Never Gonna Fall in Love Again, She Did It, Hungry Eyes (from Dirty Dancing), and Make Me Lose Control. He also wrote the smash Almost Paradise for the movie Footloose, which was recorded by Mike Reno and Ann Wilson (of Loverboy and Heart respectively).

In the words of Psalm 126, The Lord has done great things for us, we are filled with joy!

Filled with joy is putting it lightly! :-)
Peace,
BMP
Scribbled by Brian Michael Page at 2:15:00 PM