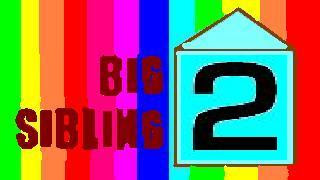 This year, we have some returning and some brand spankin' new houseguests in Big Sibling 2.
Our returning guests are:
1. Joan C., a Benedictine nun and columnist
2. Roger, an archbishop who thrives on liturgical dance, kool-aid pitchers, and bogus religious edumacation conferences
3. Tod, a bishop who is good friends with Roger
4. Carey, a musician and former priest
5. Marty, another musician
6. David, yet another musician
7. Donald, a bishop who prefers to be a neutered fish
And now, here are our new guests:
8. Luca, a bishop who cries when reverence prevails
9. Anthony, a priest who claims the Traditional Latin Mass is part of a false religion
10. Tom, who claims the Pope doesn't trust his bishops
11. Michael, yet another musician
12. Andre, a musician who uses his guitar as part of his preaching at Mass
13. Dan, a musician who just reunited with his friends last year for the first time in over 20 years
14. Bernard, an extremist dissident from the other direction

ROFL even harder over here at #12, since it's of a more local flavor.
BMP