This past Saturday, the Diocese of Harrisburg made a formal pilgrimage to theBasilica of the National Shrine of the Immaculate Conception in Washington, DC. Yours truly served as organist for the day, man-handling the two pipe organs, with the help of Peter Latona and Richard Fitzgerald (two of the on-staff organists). I made some very beautiful music on this instrument, playing from the Chancel console. The day entailed a scriptural rosary, a Holy Hour, and the Holy Sacrifice of the Mass. I was accompanist for the pilgrimage choir, improvised a concertato on LOURDES HYMN to accomodate the huge entrance procession, and played the Alexandre Guilmant "Fugue on Stabat Mater" (L'Organiste Liturgique) for my postlude. The photos were taken on my cellphone, and include a view from the chancel balcony looking down to the Ambo and the Altar of Sacrifice, a view from the chancel balcony out into the nave, and a view of me sitting at the massive 4-manual console by Goulding and Wood. In the photo of me at the console, you can see the television monitors that enable me to 1) see what is happening at the altar, and 2) see the conductor of the choir, which is positioned on the floor between the Altar of Sacrifice and the Baldachin Altar. A great day was had by all. 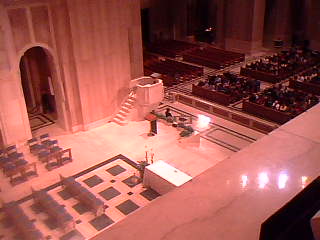 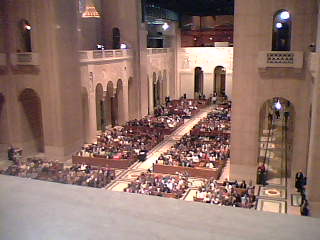 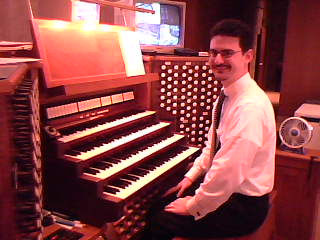 Excellent!! That is a wonderful organ, at least from what I've heard on CDs.

My son, who's a freshman at CUA, raved and raved about it. He's was doing his best to make me jealous.

D'oh. He's was=he was. Too much coffee today.