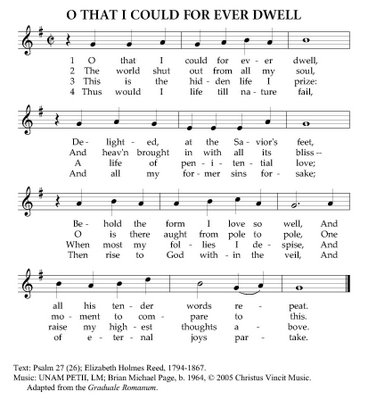 The anthem O That I Could for Ever Dwell is based on part of Psalm 27. The text is by Elizabeth Holmes Reed (1794-1867), and was discovered here. The music is my own, based partly on the chant UNAM PETII, though metrical. The melody/text-only version is above. The anthem version is rather simple: verse 1 is sopranos and altos in unison; verse 2 is tenors and basses in unison; verse 3 is in SATB; verse 4 is unison with a descant. The piece is moderate in tempo, but dynamically it is very meditative. Even on the climactic descant, I use only 8' and 4' stops on the manual (16' and 8' pedal)