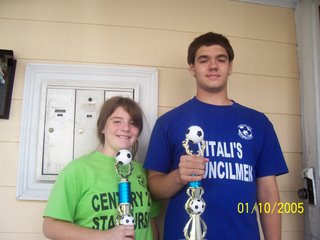 This morning, my son Brian and my daughter Brittany both won playoff crowns!

Brian's team, the fourth and final seed in the U15 boys division, beat out the top seed in Game 1. The score was tied 1-1 after overtime, and had to be settled in a shootout, which Brian's team won 5-4. They then beat out the Game 2 winner in the finals by a score of 3-1.

Brittany's team, who was the top seed all along in the U10 girls division, beat out their bottom seed in Game 1 in overtime, 2-1 (the winning goal scored via penalty kick), then beat out the Game 2 winner in the finals by the same score as Brian's finals win - 3-1.

Congrats to your kids. How tall is your son anyway? Has he overtaken you yet?

Congrats to the champs on their winning season!

Brittany? Isn't she the one who is the voice of the poncho ladies?

Thanks all for the congrats.
BMP