Robert Kumpel has caught the infamous Dick Vosko in the building of a new airport terminal, er, church. Let's look at this project - Blessed Sacrament in Warren, Ohio...

First, here's the latest of airport terminal designs. The only difference is the lack of security checkpoints in the narthex (or the bastardized PC term, "gathering space"). 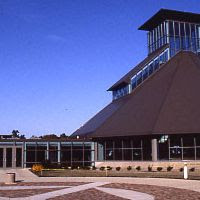 Now, here is the new interior (the bastardized PC term, "worship space"). Check out especially the large open window in the background. It tempts me big time to run outside and make funny faces through the window, point to some random people that are inside and laugh, then RUN! 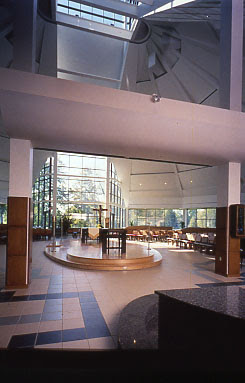 Catholic Culture has a story on the serpent that is known as Fr. Dick Vosko.

Simon Peter, thou art Rock. And on this rock, Christ has built his church. The gates of hell (er, Vosko) shall not hold out against it!

Also, there is a book out, called The Renovation Manipulation, which exposes Vosko and similar ilk and how to defeat it. It's the antidote to wreckovators everywhere!