MUSIC FOR HOLY MASS (and "OK I Confess!") 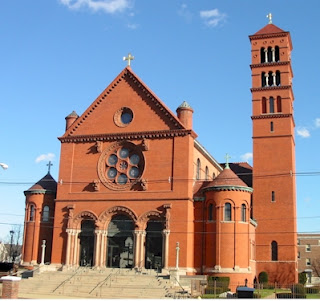 OK - I did reveal a little something to a small handful of "select friends", to some by an "invite-only" message board that the entire snark team is part of, and to select others by e-mail. I'll pretty much reveal that here in the open.

I had titled the private post "Put two and two together"...

Yes, I attended Holy Mass on New Years' Day at the church pictured here - Blessed Sacrament in Providence. This particular church has had a couple of really good organists over the last decade - Donald Dame, until a nasty fall on the ice incapacitated him, and Pierre Masse, his predecessor. When I returned home from Mass last Tuesday, a local friend who also frequents our "invite-only" board sent me an e-mail, saying that he got word Blessed Sacrament is hiring.

I e-mailed my resume to the parish e-mail Tuesday afternoon, and was asked by phone yesterday to re-send my resume to the pastor's own e-mail. I did that. The phone call I got yesterday from the secretary is a sign to me that there is a position open there. Whether it is permanant or interim (interim as in "it's over once the incumbent music director is fully recovered", which must be respected at all times) is yet to be told, however. But I am obviously not withdrawing my running.

In the meantime, it did win me two Masses this Sunday as a substitute organist (8:30 and 10:30). I do have the list here. DISCLAIMER: I did NOT pick these, though a couple of these would have been on my list had I been given that privilege. There is a cantor for both Masses. Pew books are the 2008 Breaking Bread and the 1984 People's Mass Book.

We three kings of Orient are..."Kings of Orient"
Lord, every nation on earth will adore you...
- (NOTE: Setting unknown till I get there and see what the cantors have been given.)
Angels we have heard on high..."Gloria"
- (NOTE: since this was listed in place of the Alleluia I will TRY to talk the powers that be into letting me use an ACTUAL alleluia.)
The first Nowell...English carol
Mass of Creation...Haugen
- (NOTE: If I was to become music director, I fear I may have to keep this one in rotation for a little while anyways.)
It came upon a midnight clear..."Carol"
What Child is this..."Greensleeves"
- (NOTE: from my understanding the Communion will be either/or of the above.)
Silent night, holy night..."Stille Nacht"
Joy to the world, the Lord is come..."Antioch"

This may lead into something, or it may not. I'm praying hard that it does, though I am also praying for Don Dame's recovery as well from his misfortune. 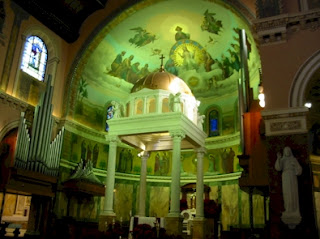 And yes, the sanctuary you see at left, the same as I posted earlier this week, IS the one at Blessed Sacrament Church. You can see the organ cases on either side of the sanctuary. There are four - apparently one for each of the three manual divisions, and one for the pedal division. It IS the Aeolian Skinner that the Organ Historical Society printed a new page on after reviewing the update form I sent them. Three manuals, twenty-six stops (four of them mixtures), twenty-eight ranks. The console and choir area is not in the sanctuary or the loft, but in the south transcept, nearly out of sight of most worshippers and definitely not taking away from the actions going on in the sanctuary.

The four mixtures are a Fourniture (great), IV-VI (for you non-organists, that's four to six ranks depending on pitch), a Cornet (choir), II, TC (that's a two-rank cornet mixture, starting at "tenor C"), a Cymbale (also in the choir division), IV-V, and another Fourniture (pedal), III-IV. I also like the fact that this is the first pipe organ I've played in my 26-1/2 year career that I can recall having a 32' stop - a Contre Basson in the pedal (note on the stoplist says that the bottom octave is a Cornet).

For more info on organ stops, check out the Encyclopedia of Organ Stops. It's very comprehensive.