Yes, that's not "populi" (of the people), but "pupuli" (of the puppet). Here's a glimpse of what's going on in Louisiana's capital city, Baton Rouge: 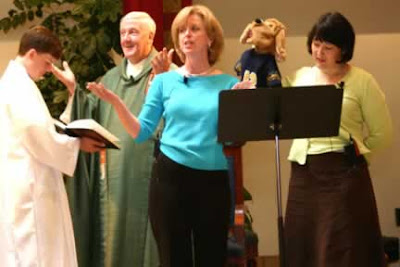 The puppet pooch with the number 12 shirt is "Dexter". Wait! This crap's going on at Mass. Shouldn't it be "Sinister" instead? Thank God "Dexter" isn't consecrating! We'd REALLY be in trouble!

According to the Curt Jester, the bishop there seems to be OK with it. Oy vey! Further, this could be a Louisiana epidemic. The Jester concludes:
I am starting to wonder if Louisiana is now the headquarters of the Puppet Mass since a Fr. Sweet in Shreveport is a ventriloquist who does Mass with his puppet Charlie. I assume In Persona Puppet.

This gets me wondering... Jason, do you know of any crap like this going on in Lafayette?

For my next act, Father will celebrate Mass invisible. Yeah, right! Drink some of that stuff Fred Flintstone invented - "412-Up", the stuff that Barney Rubble guzzled that made HIM invisible (the funniest part of that, btw, is when Fred got stopped for speeding, and the invisible Barney says to the cop, "uh, just give me the ticket and shut up!"). Yeah, drink that stuff, then start processing in - completely invisible.

You think that idea is stupid? It sure is. So is the puppet Mass and the ventriloquist dummy Mass (OH NO!!! It's Mister Hat!).

APPENDIX 2/1/08:
Do not give what is holy to dogs, unless they are a puppet dog, snarks the Curt Jester. I'm suspecting this is inspired by a line in the Ecce Panis Angelorum part of the sequence Lauda Sion Salvatorem that goes like this:

Vere panis filiorum, Non mittendus canibus.
This translates thus:
Truly the bread of children, not to be given to the dogs.

And for my next trick, I will play Mass invisible. But the secret is that I'll just go hide...in the Caribbean...

Speaking of the Caribbean...
I knew a pastor who, when I was in my teens, would go pulpit-pounding for money, then put a thermometer-type thingie in the bulletin each week, with the "goal" (how much he thought each person should be giving) at the top of the thermometer. Once the thermometer topped off, he would go on a Caribbean cruise. No word of a lie. This happened like at least three times that I can recall.
BMP

WOW! Do we laugh or do we cry? I don't know of any Missae Pupae going on in this Diocese. But I do know they shut down polyphony choirs and chant scholas. The cathedral in Baton Rouge suffers from one of those terrible post VatII redo's. The building, I'd say, is Victorian Gothic Revival on the outside, but inside, the sanctuary looks like the bridge of the Starship Enterprise. There is a nifty Reuter instrument there, however, and a good music program. I've heard of unusual liturgical practice going on in Baton Rouge, but I don't know specifics. Hold on let me calm my nerves (Jason whispers: "Book of Common Prayer, Book of Common Prayer, Book of Common Prayer)