I wasn't kidding when I said this church was gorgeous!

I stumbled onto some really nice pics of St. John the Baptist Church in Pawtucket, where I had attended Mass for Advent IV, Christmas (Midnight, with my daughter Jessica), and Holy Family. Of the twelve Catholic churches in Pawtucket, St. John's is definitely the most majestic looking (though other notable mentions in the city include St. Mary of the Immaculate Conception, St. Cecila, Our Lady of Consolation, St. Edward, and St. Joseph - the old St. Joseph, before it burned down in 1976). These come courtesy of the Lemieux and Associates Pipe Organ Company. Daniel Lemieux has been doing work on several notable organs in southern New England and upstate New York. The notable organs around here include St. John's, St. Anne's monster Casavant in Fall River, MA, and St. Anthony's monster Casavant in New Bedford, MA. 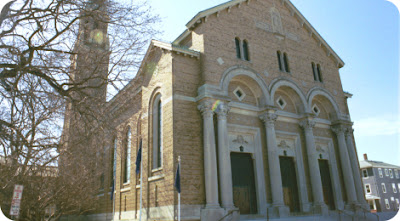 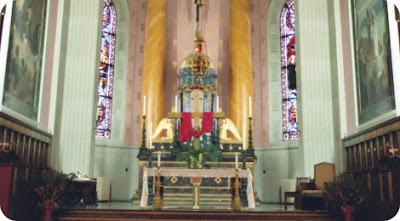 The sanctuary, which is eight steps high. Though you can't see it from this pic, above the apse is the inscription ECCE AGNVS DEI (Behold the Lamb of God). The classical Roman style of using "V" in place of "U" was utilized in this inscription as well as the inscriptions on the side walls of the nave. 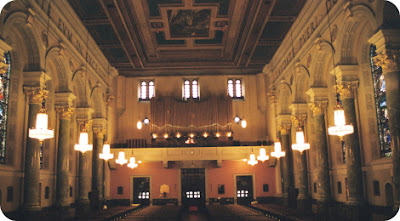 View from sanctuary to the choir loft. Note the inscriptions along the top of the side walls:
LAVDATE PVERI DOMINVM, LAVDATE NOMEN DOMINI.
LAVDATE DOMINVM DE COELIS, LAVDATE EVM IN EXCELSIS.
(Praise the Lord, O children, Praise the name of the Lord, -- Psalm 113(112))
(Praise the Lord from the heavens, Praise Him in the highest. -- Psalm 148) 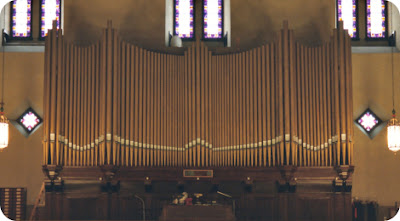 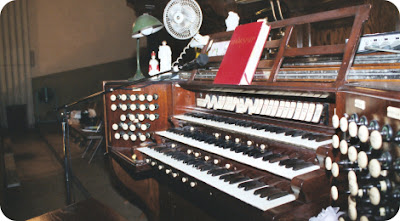 The console of the COC organ. And it's nice to see my favorite '70's hymnal (Worship II) up on the music rack.