In the small town of Guelph, Ontario lies a big beautiful church, Our Lady of the Immaculate Conception (or, as known by the townsfolk, "Church of Our Lady"). Outside, it kind of reminds me of SS. Peter and Paul Basilica in Lewiston, Maine. 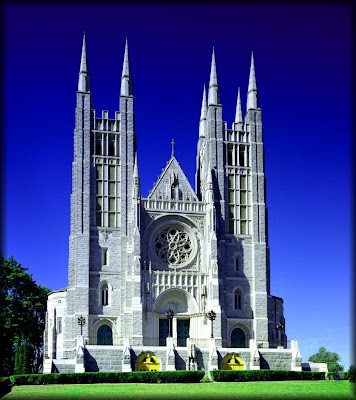 I auditioned for the music director post at SS. Peter and Paul Basilica (above) in Lewiston, ME, back in 2002. Didn't get the job. You should see the Casavant that they're restoring there too! The church became a minor basilica, the only New England basilica north of Massachusetts, in 2005. Phil Fournier, who was the music director at Immaculate Conception Cathedral in Portland, ME, at the time, was on hand at my interview. He's now music director for the Toronto Oratory. 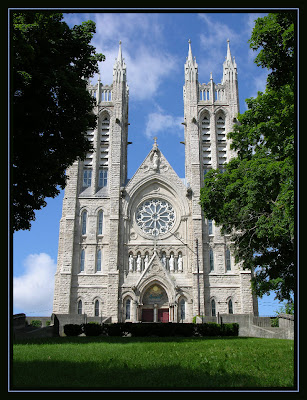 Church of Our Lady, Guelph, ON, Canada. Quite the resemblance on the outside, give or take the statues, to SS. Peter and Paul. 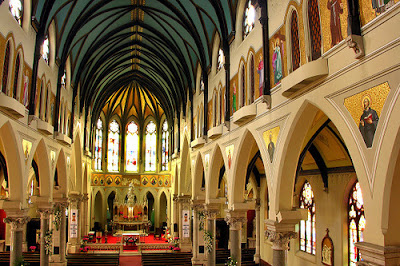 Here's an interior shot of Church of Our Lady. Very nice! I hope the music's just as good.

More shots of the Church of Our Lady at NLM.

UPDATE: Bear-i-tone (who is from Ontario himself, along with his co-blogger wife, Puff the Magic Dragon) at The Spirit's Sword dropped me this line in the combox:
Fr Richard Vosko was brought in at one point to help with some renovations at Church of Our Lady. The congregation successfully united to bring an end to his proposed renovations.

The best thing the parish did was run Dick Vosko out of there! They saved themselves a lot of damage. Those who have read this blog for a long time know my opinion on Dick Vosko. It's not pretty. Type "Vosko" on this blog's search (all you who haven't heard of the Dickster) and you'll find some goods scattered about between 2005 and now.

Fr Richard Vosko was brought in at one point to help with some renovations at Church of Our Lady. The congregation successfully united to bring an end to his proposed renovations.

Good thing they got him out of here. I've seen enough of Dick Vosko's portfolio to make me want to barf continuously for weeks. He is the biggest name in church wreckovations in North America, IMO.

Whew! I second that statement, Brian. That would have been a travesty to see yet another marvelous facade wrecked by Vosko.

I found the story. Here's the link if you wish to know more: