ANOTHER TALE OF TWO CHURCHES

At the end of January, I had blogged on two very similar church buildings, SS. Peter and Paul Basilica in Lewiston, ME, and the Church of Our Lady in Guelph, ON.

Now for some news on a more local level:

This morning after Mass at St. John's, I found some pictures on the bulletin boards (the pastor announced these after Communion). These pictures were of a church in Montreal built by the same architect (Ernest Cormier), just two years after St. John's was built. The church was originally named Ste. Marguerite-Marie, but later became a "Latin-American Mission" and was renamed Notre-Dame-de-Guadalupe.

Similarly, St. John the Baptist Church in Pawtucket, RI, was built for what was originally a French-Canadian congregation. Known as late as the 1970's as "St. Jean-Baptiste", locals often referred to it simply as "St. Jean's", pronouncing "Jean's" in English (long "e" sound). However, as a result of a change in demographics, the parish is now heavily Hispanic. St. John's has two Masses in English and two Masses in Spanish.

Unfortunately, neither church has much for pictures on the web. In fact, the Montreal church doesn't even have a website. I was able to, however, come up with these. 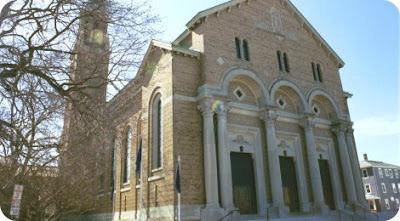 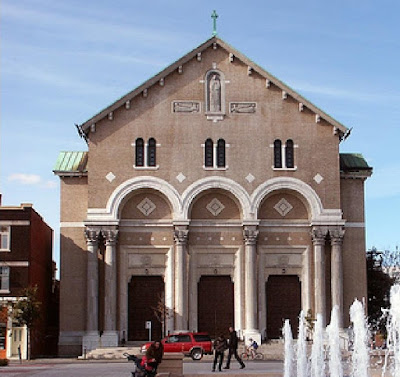 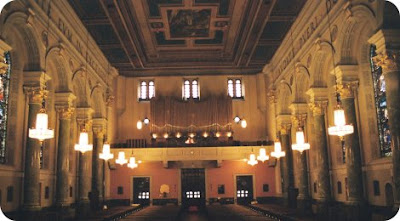 The interior of St. John's. 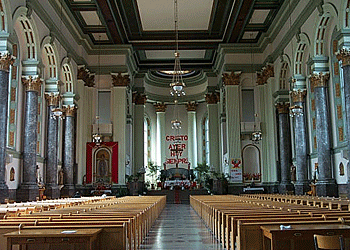 The interior of Notre-Dame-de-Guadalupe. The windows take a very similar shape. According to the pastor of St. John's (in my post-Mass conversation with him), the windows of both churches were designed by the same Parisian artist (though the windows at St. John's actually have drawings).

A couple of other differences - the ceiling and the lighting - are also visible in these pictures. The pastor at St. John's is fixing to research the artist who worked on the ceiling there. The organ case at St. John's is larger. There is a picture on the St. John's bulletin board showing the organ case. However, I couldn't find any pictures of the organ on the web. Also, there are about ten steps one must climb to get to the sanctuary of St. John's.

I say there, we have twins!
Peace,
BMP
Scribbled by Brian Michael Page at 2:13:00 PM

Ah, twins. Yes, they can duplicate the good stff as often as they wish.

There are probably a fair few twins out there. Years ago, priests were often in charge of the design of their own church. They would frequently grab an architect and tell them: "There was this church I saw when I travelled through (somewhere or other)- I want a church just like that." Now, had I been a priest of that era, the temptation would simply have been too great: "There's this church I saw in Rome... it goes by the name 'St Peter's'. Build me such a church, only bigger."

As I said, they can duplicate beauty as often as they please. But I hope never to read a post on your blog that reads: "I think we have a twin of the LA Cathedral."