WHAT'S GOING ON UP IN THE ARCTIC? 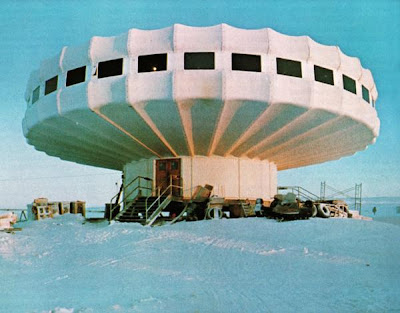 I have to admit when I first saw this picture, I thought it was a new church and I was thinking "What the hell is Dick Vosko doing in Alaska?" Ya know, with all the nice churches he's wreckovated and the hideous new churches he's built, something like this wouldn't surprise me.

Fr. Finigan explains what's really going on:
Above is the arctic cyberpod from which Fr Z and myself, the NLM, the Curt Jester and a few other secret bloggers send out death rays to modernist computers round the world, post inaccurate texts, compose viruses that will make computers used to compose clown liturgies give off incense through the air vents, and generally by such means bring the free world to its knees.

(I told him in his combox to count me in!)

Our latest planned jape was to devise a fiendishly inaccurate version of the ICEL texts and pepper the internet with this inaccurate, unfinished, unapproved and unduly altered text that was so totally lacking in integrity that it would cause general mayhem and confusion.

(I just got it, matter of fact... What's this? Father now closes the collect with "We ask this through Christ our Lord, and buddy"???)

Sadly when we heard of the need to write to the USCCB Secretariat of Divine Worship, 3211 Fourth Street, NE, Washington, DC 20017, our plans just collapsed into dust and ashes - we were completely foiled. None of us has written out a postal address for several months and we are out of those square pocket thingies with the gummed flap you have to lick and fold down, and those little coloured squares you have to stick on. So we had a nice cup of tea instead.

(DAMN! I got a whole boxful of those square pocket thingies with the gummed flap you have to lick and fold down. Can't help you on the little colored squares you have to stick on, though. Sorry.)

Absolutely Hillarious, I'll bring my giant furnace specially designed for glass "chalices" but you're more than welcome to throw OCP Missalettes in them too.