...from the local bus shelters

On December 7, 2006, in my rant about a new sleazy bus shelter ad sign promoting Planned Parenthood's new express clinic (often referred to here as the "quickie clinic") on Providence's East Side, I made this promise: I'll have a pic soon.

Well, I have three from a bus shelter in Pawtucket, just north of Providence. Click on them so you can see them nice and big and read the fine print. (Might not be for the faint of heart.)
(Special thanks to my wife Ann for letting me use her camera and e-mailing me the uploads) 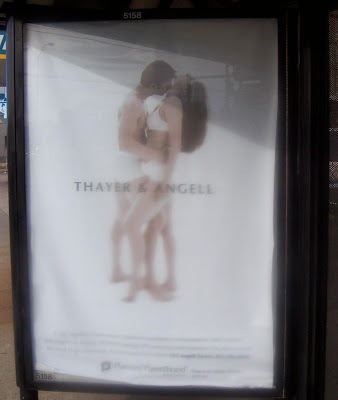 Mind you, this isn't the only couple that models for these ads. Other couples, including two people of mixed races, have also appeared as "spokesmodels". 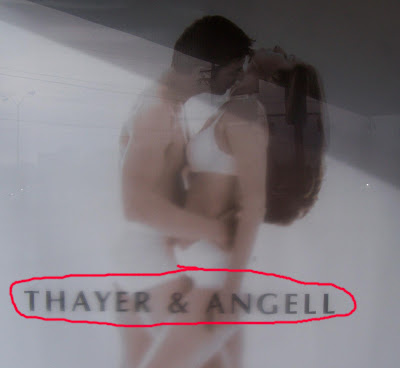 The name Thayer and Angell and this sleazy picture at first makes me think some lingerie shop on the East Side. However, when you look at the bottom of the same ad, you get this:

You see the address, 183 Angell Street - yeah, at the corner of Thayer Street, that explains the Thayer and Angell. Here's what Duffy and Shanley (PP's ad agency) had to say:
(Providence, RI) July 10, 2006 - Duffy & Shanley's latest campaign for pro-bono client Planned Parenthood of Rhode Island raises visibility for the new Planned Parenthood Express facility which opened on College Hill in early July.
To promote the new location, which offers fast and inexpensive service without the need to book an appointments, Duffy & Shanley created ads to be placed in transit shelters and high schools from July to September.
The "Thayer & Angell," concept of this campaign transforms the location of the new Express site into characters portrayed by the young man and woman intermingled in the ad. To promote the "peace of mind, faster" philosophy of the facility which offers birth control, emergency contraception, pregnancy testing, HIV/AIDS testing and counseling, STI screening and treatment, the ads needed to be provocative, to gain attention of the young audience.

Deceiving, isn't it (not to mention their missive above says that the signs will be up from July to September, and here it is January and the damn things are still spreading like a bad virus)? Sickening, isn't it? Want to hear something sick? The following are the educational facilities that this quickie clinic is in very close proximity to (one mile or less):
Brown University (Rhode Island's Ivy League college)
Rhode Island School of Design (Rhode Island's big art college)
You think that's bad, you also have (in the same area, mind you):
Lincoln School (an all-girls college prep school for pre-Kindergarten to grade 12)
Wheeler School (a co-ed college prep school for pre-Kindergarten to grade 12)
Moses Brown School (right up the street from Wheeler, another co-ed college prep school for pre-Kindergarten to grade 12)
Hope High School (one of Providence's public high schools).

Nice thing to teach our children? I think not! Sick frickin' sleazebags!

Do you think that the tax-paying people from your Church would be willing to write letters to the local newspaper & town coucilmen?

Planned Parenthood makes its money teasing our children into the minefield that is premarital sex. I once attended a session at a PP sex conference (commercial)at a local high school, where parents were invited, but carefully screened out.
I walked the halls to see what was going on in the other room. . .
The teens' discussion was nothing but a discussion of sexually explict teasing, where the boys were encouraged to come on to the girls. . .so they'd need PP.