As interpreted on stained glass 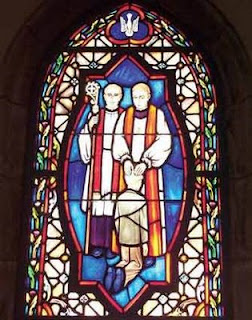 Don't ask me who designed this stained glass window, but I won't be going to that church anytime soon. Red Sox cap tip to Fr. Erik, who interpreted it thus:
The artist must have been singing "A Touching Place" while assembling this!

While LMAO at Fr. Erik's quip, I knew there was a reason I never have (nor ever will, even on a triple dog dare) programmed A Touching Place for ANY given liturgy, public or private. Of course, that didn't stop its being published in Gather Apprehensive and RitualSong.
Living proof of what was going on in people's heads at the time. (Note: reference was to the 1994 Gather App. The song was dropped for the 2004 edition - the one with the new softie cover.)
Peace,
BMP
Scribbled by Brian Michael Page at 11:12:00 AM

Ok, Joking aside, I can see that the artist is trying to show a priest blessing a man/boy, but really did he have to depict it from that particular angle. Couldn't he have done it in profile. But in this posture, the depiction is ... is...
just so wrong on sooo many levels.