Paul Nichols has this hilarious cartoon, inspired by said event: 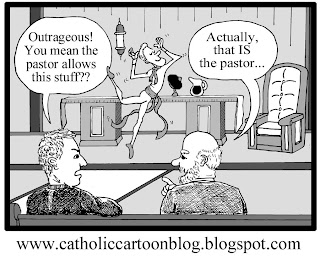 Gerald Augustinus dares us to listen to this year's hideous theme song (link leads to clips from this year's and other previous years' theme songs, one worse than the next). I didn't know whether to get out the laughing cat or just puke, or whether the laughing cat might puke. His fitting review:
"Apart from the fact that frequently the lyrics and topics from that convention aren't really English but Catholish, that painful, syrupy jargon that's been around for a few decades, they tend to sound as if they were directed at the suicide wing of the insane asylum where no one must be in any way offended."

UPDATES as of 5:49 3/2/07
Anita at V for Victory reviews the program in great detail, dubbing it Baloneyfest.
Mark at Dominican Idaho uses a term that my daughter Jessica humorously uses: edumacation, as in the Los Angeles Edumacation Conference.

You know, I really try to be positive. I don't think it does anything but demonstrate immaturity to call songs "Beagle's Things" and imply Mahoney is in league with the devil. There's a lot more we can do positively than repeating the same old tired lines about things we don't like.

That said, that whole "Mahoney-fest" really is disgusting. And I say that as someone who doesn't really care about pouring the Blood, "ugly" buildings, female servers, and to be frank I like the OLA Cathedral. But still, the pictures of that festival are just abominable. It looks like some rock show made up by someone on acid. I really don't understand how anyone in their right mind can go to something like that.

This reminds me of my mother's comments on the Tridentine Mass. She once said, "It wasn't the Latin, it wasn't the choir singing, it wasn't the priest's back to you [sic], and it wasn't even the secret parts. It was the whole combination of things that made it hard to put up with." Her viewpoint aside, the same can be said here. It isn't the rank heresy preached, it isn't the liturgical dance, it isn't the music, and it isn't even the Blood in glass vessels. It's the whole thing combined which turns into something disgustingly OPPOSITE of church. I CAN see how someone would go to a REC and have dancers, or screens, or Mahoney. I just don't see how someone can go to a place with ALL of those and not at least get the sense of "This isn't right... something about this isn't like church."

Ah! Apparently Cardinal Mahoney is on chat right now! http://www.recongress.org/2007/ that would be interesting to witness!

Simon-Peter Says blog introduced me to the term "edumacation," but the term I've fallen for is from our choir's LDS organist, who referred to "REGURGICAL DANCERS"

And I say that as someone who doesn't really care about pouring the Blood[...]

Brian, you know those video shots they make nowadays where a single character stands motionless while objects, people and life in general swirl and move around him chaotically at light speed?
That's how I feel about what this latest concocted "theme song" portends for American (Roman) Catholicism. Arggh.