Last week, a friend of mine came to write a letter of recommendation for me (he doesn't have a computer or even a typewriter, so I let him use mine). He came through my front door with a good sized box of books I let him borrow last fall (like some 1950's edition of Caecilia) and then some. Well, included in the "and then some" was this little rare find you don't see anymore: 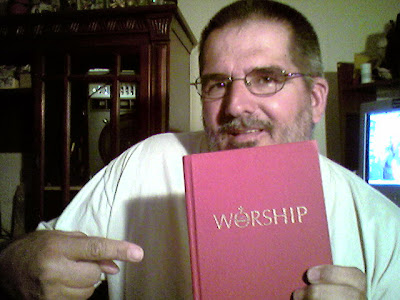 Yes, this is the pioneer of GIA's Worship series - Worship I. This is a book that didn't last too long. Published in 1971, its successor, Worship II, was published only four years later. It's function was to basically serve as a hymnal for Roman Catholic parishes in a time where throw-away missalettes were the norm.

As for the variety, it was somewhat similar to Worship II in terms of repertoire, with a few extra "folksy" tunes. There weren't many of those "folksy" tunes. Just enough to keep the one-Mass-per-week folk group in check. Yeah, remember those days, when the folk group and its banal ditties were relegated to one Mass per week, or in some places, one Mass per month? Before the variety of banal ditties expanded and was running rampant at all Masses in many parishes?

Yeah, Worship II was the better seller. However, Worship I did get things started, per se. Now to see if there's an accompaniment edition floating around somewhere. :-)

"Just enough to keep the one-Mass-per-week folk group in check. Yeah, remember those days, when the folk group and its banal ditties were relegated to one Mass per week, or in some places, one Mass per month?"

I don't have a folk band at my parish, never was, never will be...

There's only an organ, which needs replacemetn, and part of the Arch. of NY Biccentianal(sp) Campaign went to each parish. guess where our share went, to a new organ!!

I can deal with some ditties, since we are spending money on a new organ.

Oh, yes, now the Latin is relegated to one weekend per month. How joyous...not.