Fr. Erik gave this present to Bp. Troutperson (or Fishperson, as Nick rightfully pointed out in the combox), who, once again, is whining because the people need a dumbed down liturgy. They don't know the meaning of "ineffable". So, here it is... 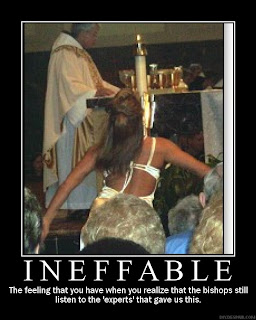 Isn't it Bishop Fishperson? Come on, trout is too specific and exclusive...

Plus, if the clergy suddenly admit that the people have adult vocabularies and brains, that also means that the people can figure out that they're being played for the fool. It's the power thing: If I'm smarter than you, I can control you. "If I pretend I know more about getting to heaven than you do and convince you of that, then you'll have to rely on me, and if you know more about anything than I do and fully admit that to me, then I will proclaim you a heretic and that you are destined for hell!"

You know, when you back people into corners like that, they will most certainly act up, like the gal in the string number pictured, and like everyone else who is brash and daring in the Roman church. If the clergy creatures would treat their people more like thinking, intelligent human beings and stop treating them like ignorant, brainless morons, there would be much more cooperation between the two. The Roman clergy in many ways considers itself elite and high minded while everyone else grovels in the gutter eating shit. I believe that the collective intelligence of the people far outshines that of the clergy. The people know that and the clergy know that, but the clergy think that if they admit it, they will relinquish their "control".

Further, it is my understanding that Vat 2 confirmed that salvation is indeed possible outside the Church of Rome. That said, so how is a little excommuicatio going to scare anyone? "Be willingly oppressed and controled. Otherwise I'll have to kick you out." That's like saying I told off the clerk at the Circle K because she doesn't sell Marlboro Lights. She told me never to come back. In that case, I just went down the street to the Seven Eleven where they have the M Lights. Doesn't make me regret telling off the clerk at the Circle K and wanting to beg forgiveness. It just makes me hate her and advise others not to shop there. Since the Church admits itself that it no longer claims a monopoly on salvation, such a lame document is really nothing more than a glorified "no parking" sign.

Sooooooo....the new English translation will probably go into use everywhere except in the U.S., whose bishops, feigning utter confusion like they always do, will plead for some worthless indult. You see, control is good, as long as 1) the Vatican isn't doing the controling, and 2) the people don't call the clergy on the carpet for it.

"Welcome to St. Morona's Roman Catholic Church Community. Reverend moth..ur, father kindly requests you turn off all cell phones and pagers, and that you should have checked your brains at the door. A brain check desk is located in the lobby by the coffee urn and the donut tray. If you haven't checked your brain, please do it now. Sister Dementia Despinata Lutea is in the back to help you. Today's mass is offered completely in grunts and cartoon pictures today, for those of us who can't understand plain English. Do not be alarmed when father accepts the money plates today at the offertory with a loud and boisterous fart. This liturgical gesture means he can now skim enough cash from the collection to pay for his 4th bathroom renovation in the parish Versailles, that is to say, rectory. And since you all have checked your brains, you've understood me simply so say 'God is great, God is good'. Thank you"

Hopefully, B16 will be around long enough to destroy any chance of a indult being recieved that would exempt the US from the new mass translation.

Jason --- that is the funniest thing I've read in a long, long time. As soon as hubby is through with his student he will in to read it.

....and it's all sooooooooooo true. Trautperson has been number one on my hit list ever since he referred to us as "Joe and Mary Catholic." How arrogant! I suspect that I am waaaaaaaaaaaaay smarter than he is.

Joe Catholic has already figured out that the TLM is much more vertical. The longer trautperson keeps this up (well, at least he's close to retirement age)