Namely the following, as reported by the Catholic Caveman (RSCT to Dad29):

Free-Thinking Single Catholics ~ A forum for the more liberally minded who are seeking either a guilt-free short term concubine-in-residence, or a long term straight-bi-gay-lesbian-transgendered-polygamous-incestuous-bestial-necrophiliac (any combination thereof) relationship. Day-Glo condoms, morning after pills, and penicillin booster shots provided free of charge to those who sign up for one year membership.

Lair of the Catholic Eco-Friendly Sissy Ticklefight Pooh Bear Cavepersons of Undetermined Gender ~ A quasi-serious weblog that gaily focuses on the glories of everything Novus Ordo. Special attention paid to true meaning of the Theology of Dandelions and Kitten Whiskers, and what it mean to everyone at Sts. Che and Fidel Catholic Community of Berkeley, California. Peace, out.

The Caveman also has this video proving how English is always evolving and Latin has always been steady.

Finally, Paul Nichols has illustrated in the cartoon below the above named sharks (er, special interest groups). 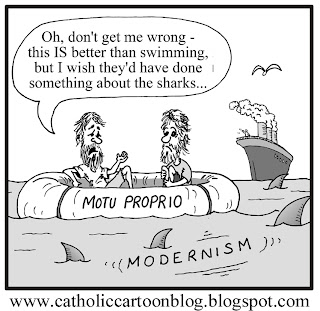