The Curt Jester has found several of them, including this one, which he captioned:

"I can't seem to find the remote control."

My thought would have been the center blur moving (like in the visualization of a sound file) as it says:

"Greetings. This is your leader speaking."

This one won "Best of Show" in Ministry and Liturgy's "Visual Arts Award for Devotional Art and Spaces".

Now, we all know that the best protection for Jesus was to have him placed in a Tabernacle. However, I don't think he was supposed to be fenced in.

Says Andy Kosmowski in his post in his Live Journal: It reminded me of the Star Trek: The Next Generation episode "Allegiance" I saw when in Texas. Click Andy's name above and you get to see the pic he's talking about. 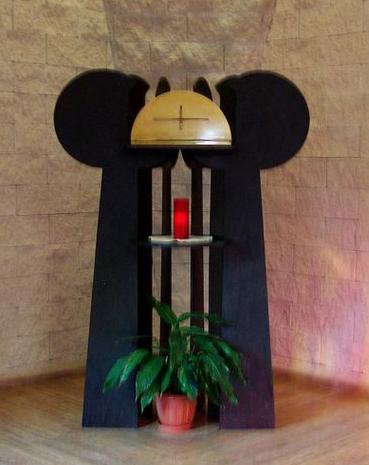 Now, this Tabernacle was commissioned for the new Disney Chapel in Orlando, Florida. There will be another one like it in Anaheim, California. This pic courtesy of Gerald at the Closed Cafeteria.


Poor Jesus! The houses they make for him these days! Art? Yes. Sacred art? I'm still scratching my head here.

There's just something odd about Christ housed in a pair of mouse ears.

I just don't understand the thought process that goes into making these. Are we really that starved from an understanding of Beauty? Are we that far gone?

Yes, Argent, we are.