Snippets from The Cafeteria is Closed, with my replies to the Archbishop right here.

Susan: "Cardinal, how do I encourage my adult children to attend Mass? My daughter especially refuses to join me because she says she can pray on her own and that the Mass is boring. I have asked her every week for 2 years now and she only attends on Christmas and Easter. In all other areas, she is a very good daughter. Please help!"

Cardinal Mahony: Adult children need to discover the deeper meaning of the Eucharist. Maybe she is not "getting anything out of Mass" because she is not "putting anything into Mass." Have her attend a Mass for Young Adults near your parish.

His first two sentences are right, but the last sentence would be a total disservice. It's like fighting miseducation with miseducation, especially if this is a typical "young adults" Mass equipped with Christian Rock and Sacro-pop and the like. You're better off sending her to a far more reverent Mass with far more reverent music. Otherwise, in her 30's and 40's, she'll be looking for that Christian rock music. Kinda like what happened to the Glory and Praise folks that are now in their 50's and 60's.

Archilochos: Did I miss the reply to the question "Do you think the Church will restore the female diaconate, and if so, when"?
Cardinal Mahony: I responded to it, but it may have gotten lost in cyberspace! The female deaconate was studied, and it turned out to be something far different than the Order of Deacon.

It didn't turn out anything like this did it? 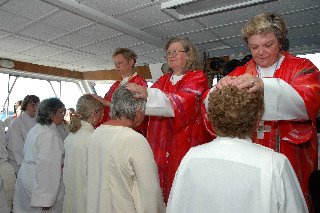 If so, then that's why the idea was lost.

Matt: "Just curious about some new things I've seen at church. May a priest change the liturgy as he sees fit? For example, may he change the words given by ICEL, use a wooden or glass chalice, or allow a lay person to read the Gospel or give a homily? Thank you."
1. Cardinal Mahony: Matt: every priest must follow and use the Roman Missal as published, and may not change any words. In fact, the Bishops are now developing a new English translation.
2. Cardinal Mahony: The material for sacred vessels needs the approval of the Local Bishop, but must be fitting for the Eucharist. *
3. Cardinal Mahony: At Mass, the deacon and priest are the only ones to proclaim the Gospel and give the homily. Now and then, others may give a reflection.

1. Yeah, and look who's heading up the BCL? Trautman, who is just as liberal as Mahony. A lot of good that does. It's no wonder the Tridentine Mass is being sought in many places.
2. Gerald rightly points out this citation from Redemptionis Sacramentum:
Reprobated, therefore, is any practice of using for the celebration of Mass common vessels, or others lacking in quality, or devoid of all artistic merit or which are mere containers, as also other vessels made from glass, earthenware, clay, or other materials that break easily. This norm is to be applied even as regards metals and other materials that easily rust or deteriorate.
Therefore, I suppose his eminence approved these restaurant quality glasses and the KoolAid pitchers (oh, such a rule doesn't apply to certain left coast Cardinals?): 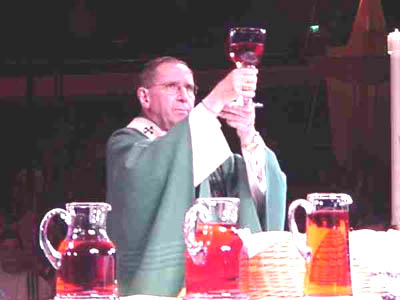 Joe: Hello Cardinal. With the growing interest in traditional worship of the Catholic Church are we going to see a more generous use of the Traditional Latin Mass?
Cardinal Mahony: It is not correct to say "traditional worship" in our Church. For a small slice of Church history, Latin was the language of Mass. But the Council moved us beyond that to a new Roman Missal. We must continue forward with the Church. However, it is important to bring with us our Latin hymns and other treasures from the past ages.

Small slice??? How about nearly two milleniums? And Latin is STILL the language of the Mass, with the Vernacular now being allowed. The Vernacular was NEVER mandated. Yeah, you have to continue forward, but within the mandates set forward by Holy Mother Church, not some progressive agenda as this Cardinal seems to promote. His last sentence is right on, though you may want to bring the Proper of the Mass with you too.

Mariette: Does Your Eminence believe there is a place for liturgical dance in the US Church?
Cardinal Mahony: Liturgical dance should never dominate or overwhelm the celebration of the Eucharist. It must be tasteful, and must always lead us to deeper prayer and reflection. A good rule: if liturgical dance leads to applause by the participants, then it failed.

Liturgical dance isn't allowed at Mass, period. A better assumption is that liturgical dance will nearly ALWAYS lead to applause. Remember this? What did all that crap lead to in the end? Applause. Thank you very much!

Gerald got it right when he introduced his "pinhead" series of photos. 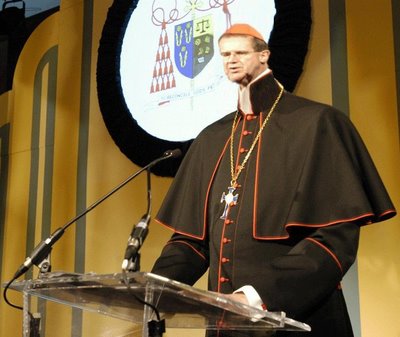