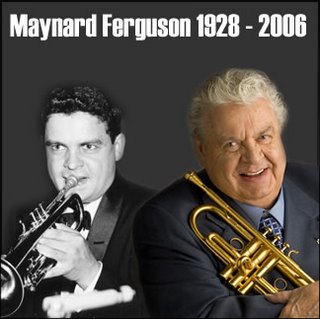 "The Boss" is dead. Jazz trumpeter great Maynard Ferguson died August 23, 2006 in Ventura, California, as the result of complications from an intestinal infection. He was 78. Born in Montreal into a musical family (his mother played in the Ottawa Symphony), he played with the great bands of the '40s, including Duke Ellington, Count Basie, and Stan Kenton, and was known for his abilities in the high register of the trumpet. In 1945, at the age of 17, he founded his own Big Band. He received a Grammy nomination for "Gonna Fly Now" (the theme to ROCKY). He was known for his pop-rock-jazz fusions, recording "Hey Jude", "MacArthur Park", and "Birdland"; his original works, "Chameleon", "Gospel John", "Fox Hunt", and for his arrangement of the theme from "Sesame Street", which, as the son of a Maynard fan, I grew up listening to. Ferguson has recorded over 60 albums and went on many tours (Not a believer of retirement, he planned to begin a tour in Japan next month). He was also a brother of the Phi Mu Alpha Sinfonia men's music fraternity, and was the 2006 recipient of their "Man of Music" award. He will be cremated. A memorial concert featuring alumni and friends of his band is being planned for later this year.

Thanks for the music. You will be missed.

I grew up listening to his albums from the 1970s (and every trumpet player in my HS band playing the 8 notes of "Chameleon"). I used to listen to New Vintage before every HS band performance and I even played some of his band's arrangements as a bass player. What a great musician and educator. Sure, he had his demons, but he gave more than he took.

I just put a Catholic blogs search window on my site and found that you're the only one with a Maynard link! I have spent thousands of hours listening to MF since my high school years in theeh 70's. He was one of the giants of 20th Century music, for his playing, bandleading, and encouraging of young musicians.

It's funny that people who are leaders in music education receive a tiny fraction of the recognition a sports coach gets, yet a kid may still be playing an instrument 50 years after high school, while others' dreams of glory in football will likely fade quickly. I say this as someone who loves sports. The priorities are skewed.