WHAT IS THAT THING??? 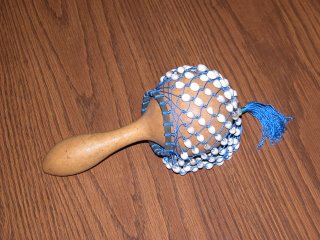 I received an e-mail that pointed me this ghastly thing pictured left. Fr. Erik Richtsteig found it in the sacristy of the "old church" (obviously a "new church" for his parish was built). It's definitely some species of maracca, but what a homely hair net this thing is wearing! Does it enhance the sound, mute it? What?

All I know is that it was used to inflict folk Masses on innocent people, says Fr. Richtsteig.

I found this to be one of a two-fold purpose. First, of course, as a percussion instrument used for the infamous folk Masses. Second, as a weapon, which strikes the head of anyone who might oppose said folk Masses.

Remedy: return the instrument/weapon to the neighboring Pentecostal/Assembly of God/Holy Roller church that it was stolen from - if not at once, then as quickly as humanly possible. I wouldn't want to see any more good Catholics get hurt.

Commonly called a gourd (what it's made from), beaded gourd, or calabash in the US, it's a West African instrument called a "shekere." Migrated to the Caribbean and the Americas via the slave trade.

Here I thought it was a Maraca. I mean, if it is that, then the local Mariachi is in need.

I can come up with some interesting possible 1970's (and beyond) uses for it, but I would have to use naughty, crude language, and it might upset some polyesther-clad hippie nuns...I'll just leave it up to your imagination....bwaaaahhhh! (yes, I'm still being facetious, as I draw ever closer to June 10, Corpus Christi, in the music list process.....)

Gitmo called and they want it back.

Hey, don't blame this sort of thing on the Assembly o'God. They kept to the piano and organ longer than Catholics did.

I'm a convert, and spent a few years in Protestant churches before finding the true Church, and the only place I ever heard goofy music was in student groups. The actual church services used piano, organ, classic hymns, and occasional solo performances.

After that experience, I cannot understand why some Catholics have the idea that junk music is something we got from the Protestants. Certainly not from their conventional worship: maybe from their songs of religious popular culture and its '60s "Jesus movement" manifestation.

It's already hollow...drill some holes in it, add a few hoses and a trombone mouthpiece, pour in some water, and light up!!! :-P

rc, I agree with you. After having been on the substitute organist circuit this past summer, I've played for the Presbyterians, Methodists, Episcopalians and Catholics. The services I did for the P's, M's and E's (I'm lazy, so shoot me) included hymns, and I got to pick the organ voluntary pieces. The Catholic Mass I played for? All schlock, and I had to request to replace one of the schlockiest pieces with something I could play in my sleep because it was during that time I was putting in 12-14 hour days in the lab, and couldn't make the time to learn ... Gather Us In ... bleech! ... I managed to successfully lobby for Alleluia! Sing to Jesus! as that I could practically play in my sleep.

Interestingly enough - singing at the Catholic Mass I played at was very robust during that hymn. There was a Chepponis Communion thing that people who weren't praying or waiting to receive Communion were actually singing. Some of the other schlock - mostly Haugen's stuff - people were rather lukewarm in their singing, and with the cantor's voice sailing above the congregation's heads, made things worse.

Okay, rant over. Here's an interesting thing - if I want to hear "Catholic" music, I have to go to the Episcopal church on the UNC Chapel Hill campus to hear it. Sad, but true.

You are absolutely right. We do not want to sing bilge, drek, drivel, etc. Unsingable melodies do not help us at all in that process. Haugen and Haas tend to do that.

I say, give me the oldies that we can easily sing vs. the modern melodies that are unsingable because of rhythms and ranges.