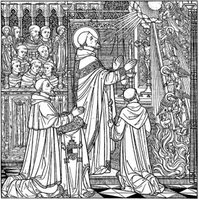 The week of June 20-25, 2006, I attended the Sacred Music Colloquium, “Restoring the Sacred”, the annual conference for directors of music and organists of the Church Music Association of America, of which I am a member. The CMAA is a professional society of Roman Catholic directors of music and is affiliated with the International Society of Sacred Music in Rome, founded by Pope Paul VI. The colloquium takes place on the campus of the Catholic University of America, Washington, D.C.
The yearly conference is an opportunity for Catholic church musicians from around North America to meet for study of sacred polyphony and Gregorian chant. Polyphony was directed this year by Horst Buchholz, director of music at the Cathedral of the Immaculate Conception, Denver, Colorado. The advanced chant schola was instructed by Scott Turkington of St. John the Evangelist Church, Stamford, Connecticut.
Each day began with Matins, sung in English, in one of the chapels of the Basilica of the Immaculate Conception. After breakfast, conference attendees convened for two hours of polyphony rehearsal. Gregorian chant rehearsal took place each afternoon for two hours. During these rehearsals, we studied the propers for mid-day Mass, celebrated in Latin or English in one of the Basilica chapels or a private chapel on the CUA campus. In addition to the chant propers, we studied and learned numerous motets and two complete Mass ordinaries: the Haßler “Missa ‘Maria Dixit’”, and the Rheinberger Mass in f minor. On Thursday, June 22, a solemn high requiem Mass was celebrated for CMAA members who had died in the past year. The requiem Mass was celebrated in Latin, chanted in its entirety and included the sequence Dies Irae. On Saturday, June 24, the solemn high Mass for the feast of St. John the Baptist was celebrated at the nearby Franciscan Monastery of the Holy Land. The Mass ordinary was the Gregorian Missa IV with the propers for the day. Motets included the Rivaflecha “Anima mea liquefacta est”, and the Lassus “Improperium”. The conference concluded on Sunday, June 25 with solemn high Mass celebrated at the Franciscan monastery. The Mass included the chant propers for the 12th Sunday of the year, and the Mass ordinary for the day was the Rheinberger f minor for SATB choir and organ.
The colloquium doubled in size this year, with more and more directors of music, organists, and choir members dedicated to the preservation and restoration of the Church’s sacred music tradition, as affirmed by the Second Vatican Council, by Pope John Paul II, and especially now by our current Holy Father, Pope Benedict XVI. So great were the numbers wishing to learn more about the Church’s own music, that this year, the number of participants unfortunately had to be limited. We pray to St. Cecilia that this trend continues as it does, and that next year, our numbers once again might double.
A few of the colloquium participants this year were teenagers and many were in their early 20’s. I would estimate approximately three quarters of the participants were under 45 years old. This gives us great hope for the future, that so many young people are taking interest in the Church’s sacred music, attracted not only by the music’s inherent beauty and the majesty it lends to the celebration of the Sacred Mysteries, but also by the stability and connectedness such music provides, rooted firmly in some 2000 years of sung worship. We pray that the Holy Spirit continue to guide us as we work continually to restore to regular liturgical use the treasury of the Church’s musical legacy.
Scribbled by Jason Pennington at 7:16:00 AM

So how hard was it to come down to earth after that?