Hat tip to Argent, who got it from Rocco. 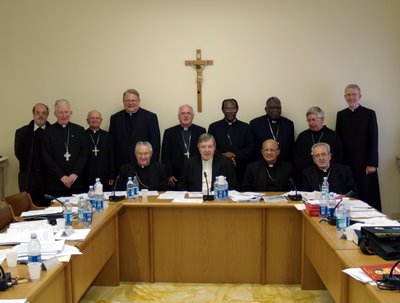 The Vox Clara Committee met for the tenth time from July 17-21, 2006 in the offices of the Congregation for Divine Worship and the Discipline of the Sacraments in Rome.

Established by the Congregation five years ago, on July 19, 2001, this Committee of senior Bishops from Episcopal Conferences throughout the English-speaking world was formed to give advice to the Congregation regarding the translation of Latin liturgical texts into the English-language, and to strengthen effective cooperation with the Conferences of Bishops in this regard.

The members of the Committee welcomed the news that several Episcopal Conferences had recently approved the “Gray Book” of the Order of Mass I. The success achieved in the completion of this foundational segment of the Roman Missal, including the parts assigned to the people at Mass, is the fruit of the work of the International Commission on English in the Liturgy and its collaboration with member Conferences and the Holy See over the past several years. Observing the fifth anniversary of its establishment as an advisory body to the Holy See, the Vox Clara Committee was grateful for the privilege of contributing to this important work.

At the request of the Congregation, the members of the Vox Clara Committee examined at length the “White Book” of the Order of Mass I, including amendments submitted in the course of the confirmation of this segment. Recommendations regarding the granting of the recognitio were formulated.

The major work of the Vox Clara Committee at this meeting consisted of a review of the “Green Book” translation of the Order of Mass II, consisting of the Eucharistic Prayers for Reconciliation and Various Needs, as well as Prefaces, Solemn Blessings and Prayers Over the People. The members were gratified by the quality of this segment of the Roman Missal and, over the course of four days of discussions, made numerous suggestions for improvements to the text.

On the next to last day of its meeting, the Committee appreciated the visit with the Secretary to the Congregation, Archbishop Malcolm Ranjith. The Secretary met with the members and advisors and thanked them for their work, reminding them of the calls by Pope John Paul II and Pope Benedict XVI to do everything possible to assure the expeditious completion of an English-language edition of the Roman Missal. The importance of keeping to the timelines for the completion of the Roman Missal was discussed with the Secretary, noting that with the publication of the “Gray Book” of Order of Mass I, and of the “Green Book” of the Order of Mass II and the Proper of the Seasons, twenty-nine percent of the Missale Romanum has been approved or reviewed by the Bishops of ICEL’s members Conferences. It is the hope of the Vox Clara Committee that all involved in this important work will continue to devote all necessary resources to its expeditious and effective completion.

The next meeting of the Vox Clara Committee is scheduled for October, 2006.
Scribbled by Brian Michael Page at 4:45:00 PM