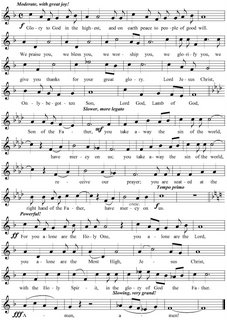 Feel free to click on the music to the left to sneak preview the melody. Also, click here for a basic MIDI (no choral or instrumental parts yet - just melody and organ accompaniment). I won't get fancy on choral parts until the translation is approved by Rome. This will save me in how many parts I might have to re-work. Later instrument additions will include brass and timpani. I promise there will be no guitars, accordions, washboards, banjos, or kazoos! ;)

One further note - in the original 1991 version of this Mass, the Gloria was responsorial. In this 2006 version, it is through-composed.

Let me know what you think.
Peace,
BMP
Scribbled by Brian Michael Page at 6:03:00 PM

I like it! I would use it at my parish.

Thanks much. Wait till you see the choir and brass/timp parts (coming soon).
BMP

Hey, I like it. One beef. Thou shalt not write high Eb for a congregation! That's one of my problems with most H/H music, those darn high D's. I'm not sure the slower tempo in the middle is necessary. The mode change does the trick just fine. You can ritard right before the flourish that starts the A' section. Just some thoughts. All in all, just what I've been hoping more folks would write!

I'll have to admit the E-flat's are rare for me. Since these couple of E-flat's go quick, I let them fly. A couple of notes:

1. There are no D's in the melody.
2. The E-flat's don't come early (like the E's on "We are called").
3. Nor do they are held for long periods of time (like in the refrain of "We have been told" - four rather slow beats. Of course, one publisher, not the copyright holder, drops the tune down a half step.)

Yeah, more like the Charles H.H. Parry high note than the Haugen-D'Hass indeed.

I did cut the middle to 80 bpm, but could actually go 90 with it. It was a bit extreme. But I did want to show some kind of contrast in the midi. The front and back sections are at 100.

Thanks for the feedback, and the overall compliment.
BMP

You mean that you WILL HAVE A MONOPOLY over the liturgical music once the translations are approved????

Let's hope I don't become a monopoly. I would, however, like to see the Haugen-D'Hass variety upstaged by those Proulx/Peloquin styles, and of course, chant.
BMP

Keep up the good work. I just saw your name (and recognized it for the first time) in the Cantica Nova catalog. Get to work on a full cycle of choral introits for the church year. You may stop to eat and attend Mass. Now get moving : )

Your text is missing the following lines:
"Lord God, heavenly King,
O God almighty Father"
after "we give thanks to you for your great glory"

Thanks much for pointing that out. I don't know how the sam hell I missed that.
Once I get the full translation I'm going to include it in my re-works. Thanks again.
BMP

I am not too sure about the thirds and fifths in the melody, but I would definitely change the accentuation of some of the lines, in which the primary beat falls under "we."

In the following two examples I have rewritten the rhythm to fall according to regular spoken English, although a case could be made for emphasizing the word "You" instead:

Similarly, in the following, I would try to de-emphasize "us" by coming at it from above; e.g.:

Whoops! Of course the D is flatted in that last line. Of course, the entire melody line could be lowered according to the harmonic progression that you have got.

Sorry; one final note, so to speak.

Thank you so much for converting from the responsorial Gloria religion. More and more I think that responsorial Glorias should be specifically banned out of respect for the text; if you are in such desperate straits, you might as well have the choir sing or schola chant it ... or just start learning a real setting of the text.

Now an antiphonal Gloria might be a horse of a different color ...

Daniel - definitely some good points to consider. Thanks much. Reworking will be done once I get access to the final text. As it is, I have to put in a forgotten line - which I continue to dopeslap myself for. (oof)
Peace,
BMP

Thanks for your irenic remark. By the way, do you ever check your Yahoo account? I thought that that was a pretty good gag ... or gig.