At Fatima Church, it's that time again: time for the yearly accounting. I just finished the final draft of my annual report. I won't bore you all with the particulars, though. If you really want to read the details of what this music director does all year when he's not sipping martinis in Cleveland Park, Washington, D.C., you will be able to shortly when my entire report will be posted at the Fatima Parish website: www.fatimalafayette.org. I always like to preface the body of my report with a little of what our creative liturgists like to call "catechesis". I find that it informs the readers that what we do doesn't come into being simply over tea and scones with the pastor in the rectory after High Mass, when we have a hour to kill before late Sunday morning Low. 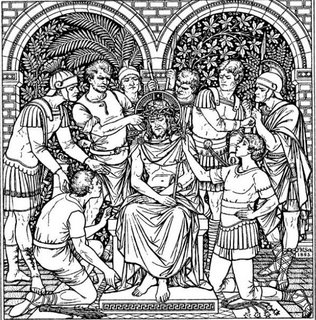 The Roman Catholic church musician is charged with the duty to present sacred texts through music which underscore lessons from Holy Scripture both to instruct the faithful and to re-orient their souls for worship of the Almighty. He also must select appropriate instrumental repertoire which fosters the same. The music of the house of God is not the music of the secular world. We allow ourselves so easily to be duped by modern culture, that in our churches there is a place for secular music and for music which imitates it. Our society teaches us that the sonorities and style of popular music should attract us all the more to worship, even worship within a Catholic liturgical context. This false logic produces a house of God imbued with the secular, a temple much like that which Christ himself cleansed, according to the Gospel of St. Mark 11:15ff. The true music of the house of God is concerned solely with the worship of the Most High and must be suitable to accompany the Latin Rite, whose participation in the one sacrifice of Calvary enables the faithful to partake in a foretaste of the Beatific Vision. The secular idiom inherently falls short here, and by its very nature can only deemphasize the Eucharistic Mystery, interfering with the mystic participation in the timeless and thus shifting the attention of the soul from the Holy Sacrifice to the self and to the emotional euphoria its music brings, both of which the indisputable icons of secularism: the self and self-gratification.
Sacred music has indeed changed and developed through its 2000 year history, however, care must be taken that all music used for liturgical purposes is organically and historically linked to the Church’s 2000 year music tradition, as the Holy Father, Benedict XVI, has stated time and again, and most recently on June 25, 2006: “Genuine renewal in Catholic music cannot be achieved except by following the great traditions of the past, of Gregorian chants and sacred polyphony.” The repertoire of chant and polyphony is vast indeed; so too is the treasury of contemporary compositions which have sprung from this tradition and which are still being composed today in the 21st century. We have wasted much time in experimentation with secular idioms in an attempt to homogenize the secular and the sacred, and that in an age when recordings of monks singing the daily office in Latin reach the “top 10” pop chart list. As Catholics we are called to evangelization, to sanctify the secular, not to secularize the sacred. The Church musician offers to God a sacrifice of music and offers to the faithful words and melodies to take along into their workaday world. Sacred music helps to establish a connection between us, the people of God, and our Creator, not only during Holy Mass, but afterwards and throughout the week. Sacred music brings us back to the house of God, if not only for a moment in the day, as we recall our visit to His house and the heavenly banquet to which He continually invites us. “I had rather be a doorkeeper in the house of my God than dwell in the tents of wickedness” Psalm 84:10.
Scribbled by Jason Pennington at 10:11:00 AM

Very eloquent, Jason. I'm particularly glad that you enlisted the quote of the Holy Father (from the Bartolucci concert, yes?) as your essay echoes his more formally outlined premises advanced in his "The Spirit of the Liturgy," which was his tribute to a book of the same title by one of his mentors.
The real rub in all of this lies semantically, in my estimation, within the quote “Genuine renewal in Catholic music cannot be achieved except by following the great traditions of the past, of Gregorian chants and sacred polyphony.” The word in question: "following." The system of the first and subsequent waves of the so-called conciliar reforms broke down immediately at the highest level, the episcopal failure to lead so that the Church could properly follow. The paradigm shift (sorry) was, despite whatever revisionists claim, huge. And there were few serious resources advanced (save for Iubilate Deo, and was that actually advanced?) that could adequately shift the forms of congregational "participation" modes from devotional during Mass to integrated modes. This reality cannot be disputed, and actually isn't by many prominent voices who have recounted and summarized worship practice in many books and essays in the last decade or so. You, me, Brian and a bunch of other folk are working our tails off to steer the nave away from the rocky shoals, but that won't be accomplished by exclusive or predominant use of chant and polyphony (the latter, of course, given the nod of your RPI essay on the implications of "participatio actuoso" of fond memory.) The "following" part will hopefully encompass emerging forms that are of highest artistic and aesthetic quality as informed by chant and polyphony. But judging by the latest efforts coming out of Collegeville, I don't think they've cracked the walnut yet either. I know that many simply wish that we could restore the authentic vocabulary of the Latin Rite Church, aka chant and polyphony, wholesale within the context of the true reform because that would constitute a major sign of cultural cohesion that many of our sister communions/rites have maintained during our implosion. However noble and desirable that wish proves, you, me and walls know that the bishops don't have the marrow and resources to effect this in this generation. But, we shall all continue to do this on their behalf, yes? Blessings, Jason.

Charles scribbled:
You, me, Brian and a bunch of other folk are working our tails off to steer the nave away from the rocky shoals, but that won't be accomplished by exclusive or predominant use of chant and polyphony

It's great to throw the chant and polyphony into the mix, but a good repertoire of solid hymnody, not that banal stuff you see predominantly in Glory and Praise or Gather, but good solid hymnody that has stood the test of time for at least the last century or two, and those modern hymns that emulate the same.

I'd like to see more Proper-based hymns as well. I know WLP has a collection of hymns on Introits. Good move. But for now, I have no problem with using a good solid hymn that will either match or be pretty close to matching a Proper for that day (Introit, Communion, etc.) while we are still stuck on the pew resources we presently have.

You're absolutely right, Brian. The key word there is "solid". Chant and Polyphony are the solid choral base.

Geez, Brian, I've been told that my handwriting is actually quite attractive and artistic. My thoughts on the other hand....;-)

LMAO - well I just can't put "Charles chicken scratched" - that's three words instead of two. That would be as bad as calling a camper a "recreational vehicle" or RV (sounds important - it isn't).