A Bit Of Lace

Yesterday I went through my knitting bag to start a new sweater. I had purchased a new pattern book about a year ago along with 5 skeins of wool to complete a celtic pattern sweater vest. Instead of written directions, the cable pattern was charted out on a grid with lines and triangles and other symbols. Needless to say, all the symbols were so similar, that the work of following it became very tedious, and I had stowed the project away waiting to be inspired to finish it. Since I had the wool, I decided that I would rip out the 5 inches or so of the sweater that I had and then use another pattern which I liked to make a different sweater vest with the same wool. I determined that the weight of the wool I had was good for the other pattern, so I proceeded in ripping. At the bottom of my knitting bag, I found some crochet yarn and a bit of lace I had worked on even longer ago. My front door has a large pane of glass which I wanted to mask with a curtain, a lace curtain at that point. So I set out in crocheting little squares, 40 of which would be about right to create the curtain. Not long after, I changed my plans for the window, and I asked two friends of mine who have a stained glass studio if they would design a glass panel for the front door based on Holmes' poem "The Chambered Nautilus". The window plan is the plan that happened. I'll blog on that later. So, seeing the bit of lace in my bag, I took a look at it, hid the loose strings and set it up in pins to stretch. At first I wondered what I could do with a little strip like this, but then realized that it was perfect for the narrow mantle over my livingroom fireplace. I had zillions of other doillies that I had made and which my grandmother had made (besides being a cellist in a women's orchestra, my grandmother's first profession was a family one: a Beligian lace maker. She also crocheted countless lace items. I learned the basics of Belgian lace from her as well as how to crochet. My mom taught me to knit when I was 4). None of these other pieces was narrow enough to fit properly atop the mantle. Here's the piece of lace right after I set it in the pins. It should be ready today, Sunday: 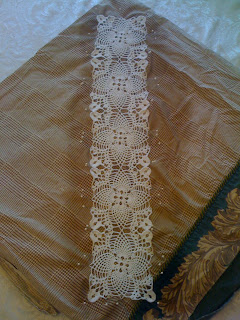 Wow, Jason - that is exquisite! I was wondering if you'd be willing to share the pattern?

Not in a million, gazillion years would I have guessed you doing such hand work. I am beyond impressed. Your new piece is lovely.

I am very impressed. I flunked knitting but love embroidery of all types (so many different stitches.)

Well, I'm also impressed by your endless talent! :) I've always wanted to learn how to knit/crochet, but all I ever learned how to do was cross stitch.