My latest brain teaser is glove knitting. I've knit almost everything in my life from sweaters to socks, but I've never tackled making a pair of gloves. I have an ancient pattern leaflet from my grandmother...not really ancient: judging from the paper and the print, it's probably from the 1960's. Gloves are timeless, though, so there's no danger of "out of date" styling. As far as I know, humans through the ages have had the same 4 finger and thumb set-up (at least as long as they've known how to cover cold hands with knitted gloves). The leaflet pattern features three different kinds of handwear: a mitten, a glove with completed fingers, and a glove with half-fingers for the middle finger, index finger and thumb. I love wearing gloves when it's cold, but I hate loosing dexterity while wearing them. It's hard to work the car radio in thick gloves, it's weird operating the gear shift, and try to use and ATM with a gloved hand. Mittens were out of the questions. Mittens transform the human hand into a dog paw. So, I opted for the glove style with the exposed fingers. This way, the majority of the hand is covered and toasty, while the outer digits of two fingers and the thumb can still do work. Next step: raiding the yarn stash. I have a little bit of everything when it comes to yarn -- mostly left-over skeins from projects. I was sure that I had some sock yarn, but no dice. The pattern is knit over 68 stitches on size 2.5mm needles, with 33 stitches equaling 10cm. The best I could come up with was a skein of dark green Canadian synthetic yarn that at its best would knit 20 stitches to 10cm on American size 7 needles. I would be using American size 2's. Not the best match for a properly fitting finished glove. So, I decided this: make the glove with the fat yarn on the little needles just as a dry run to check out the geometry of the project, then go to the yarn shop and pick up a couple skeins of sock yarn to make the actual gloves knit to be worn by human hands. I took my bulky yarn and my little needles and started the right glove. No problems with the glove prototype. The pattern made complete sense (not all patterns do, and some are filled with mistakes). With the bulky weight yarn, the resulting item is big enough for Sasqwatch. On the other hand (pun!), knitting it allowed me a chance to investigate the concept of making the fingers and the thumb. All knitting patterns are basically different spins on the same concepts. So, doing this dry run put me in tune with the glove concept. Today, I'm going to pay a visit to our friendly local yarn shop in search of the right yarn. Here are two photos of the monster Sasqwatch glove. The first is the glove in progress, the second I took this morning after I finished it up. And no, I'm not hiding the strings on the finished glove -- no sense for that. It'll be stored away in the "sample" box along with swatches of celtic cable motifs and the like. 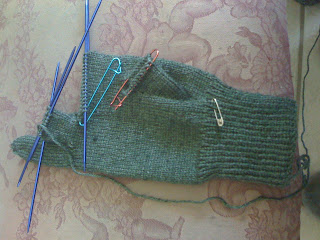 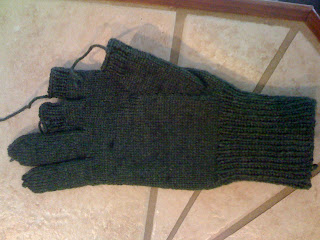