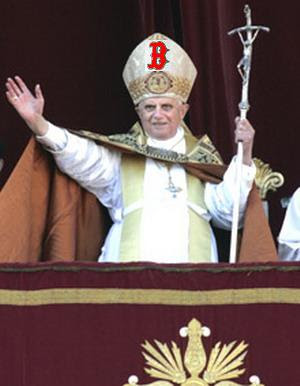 Domini Sumus got the skinny from the AOL Fan House:

A quick glance of the Yankees' schedule in April reveals a pretty strange stretch: they're on the road for almost three straight weeks from the 8th through the 28th, with a random two-game home stand jammed in the middle against the Red Sox on the 16th and 17th. That makes for an awful lot of traveling and some angry Yankees. But why is the schedule so funny?
Turns out Pope Benedict XVI is coming to Yankee Stadium to say a mass on April 20th, which required that weekend's series with the Orioles to be flipped from New York to Baltimore. Since schedules are apparently incredibly delicate things, MLB didn't flip any other series to accommodate the Yanks. The result is a schedule that requires them to be in Tampa on the 15th, New York in the 16th, and Baltimore on the 18th. That's a bad week.
So the Pope is messing with their schedule, the Red Sox have won two World Series in the past four years, and Hank Steinbrenner is in charge. There's only one conclusion to draw from this whole scenario, really. God hates the Yankees.

Well, guys and gals, I wouldn't so much as say God HATES the Yankees. After all, God LOVES everyone. I do believe, however, it's a matter of the recent influx of Vatican officials (the Holy Father included) who might have hopped on the Red Sox Nation bandwagon.

Peace from one who supports two teams - the Red Sox, and whoever beats the Yankees,
BMP
Scribbled by Brian Michael Page at 12:16:00 PM